BY GLENN ASTARITA
October 19, 2018
Sign in to view read count 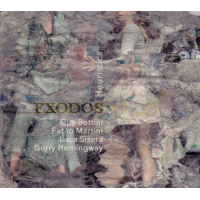 The Leo Records website narrative states that this new ensemble distances itself from the clichés associated with European improvised music as the program does not adhere to a particular vision or overarching concept. Indeed, it's music without borders by musicians who possess wide-ranging and distinct resumes, including revered American drummer Gerry Hemingway who imparts his signature flair and improvisational prowess into the mix.

Bassist Luca Sisera and Hemingway are superb when formulating these cadences via the soloists' unconventional phrasings intertwined with jittery and suspenseful mini-plots amid multiple trajectories. With Fabio Martini's prickly alto saxophone lines and trumpeter Guy Bettini's expansive choruses the band often generates turmoil and high heat. Along with sensitive tonalities and scorching outbursts, Sisera offers contrapuntal statements and participates in call-and-response dialogues during various movements, as the drummer mimics, peppers and accents the rippling metrics.

Bettini's sputtering notes on "Epeisodia 1" instill a haunting musical environ, abetted by Hemingway's creaky cymbal swashes, morphing into bluesy patterns. But the rhythm section picks up the pace, where the bassist steers traffic for the hornists to stretch and realign their wares. Although "Stasimon B" is an asymmetrical free form romp with a skittish flow, awash with a gamut of emotive aspects and sophisticated developments. Moving forward, Hemmingway delivers a simple but cyclical pulse that sounds like a march beat to a gloomy vista. And he unleashes a rather poetic drum solo, hinting at the rhythm of life on the following track, "Epeisodia" also consummated with airy horns performances.

Since it's a new ensemble, the album title duly projects the artists' rite of passage, as they pool their resources and learn—as a team—how to attain goals and objectives while having some great fun throughout these largely, mutable processes.