By Bruce Lindsay
October 26, 2009
Sign in to view read count 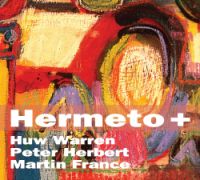 Pianist Huw Warren has been inspired by the music of Hermeto Pascoal for over 25 years, and Hermeto + is a fitting tribute to the idiosyncratic Brazilian composer. The tunes—half of them written by Pascoal, half written by Warren—move from lyrical ballads to up-tempo dance tunes via occasional experimental pieces, demonstrating the range of both composers' styles as well as the technical ability of Warren's trio.

The album is bookended by two Warren tunes: "The End Is Also the Beginning" and "The Beginning Is Also the End." In fact, the former is a short re-working of the central melody of the latter (or vice versa), a more complex composition which opens with some free-form interplay between Warren and Martin France on drums. Between these two tunes, the album alternates between Warren and Pascoal's compositions.

Pascoal's tunes are mostly up-tempo, joyous and danceable affairs; they lift the spirits with their warmth and humanity. The musicians approach them with respect, but with creativity and understanding as well—they are rethinking, not simply reproducing, these tunes. Warren's piano playing is especially outstanding on "Briguinha de Musicos Malacos." The tempo and precision of his playing gives the tune an energetic—indeed breathless—feel, particularly in the final minute when Warren raises the tempo even further. On the delightful "Harmonia sem Chronologia," Warren doubles on piano and accordion, creating a beautifully rich and irresistible sound. By contrast, "Desencontro Certo" is a ballad, performed as a piano solo. Warren's delicate and precise style is well-suited to this piece and his performance is engaging and affecting.

Warren's own compositions are more experimental and abstract than Pascoal's for the most part, but still rewarding. Two exceptions to this rule are among the best tracks on the album. "Nos da Good Knight" is one of the simplest and most immediately engaging tunes in this collection. Written by Warren, this is an instrumental version of a song with lyrics by his fellow Welshman Aled Jones Williams ("Nos da" is Welsh for "good night"). "DP & C" is a hard-bop-style tune driven by Peter Herbert's tight, forceful bass and France's exceptional drumming.

Hermeto + is thought-provoking, original, beautifully arranged and beautifully played. It re-affirms Pascoal's talents as a composer, and will hopefully bring Warren's own compositional skills to a wider audience. The musical talents of the trio complement the tunes with a freshness and vibrancy that extends their possibilities, and the result is a pleasure from beginning to end.