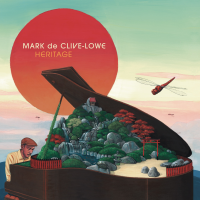 At home in jazz and hip-hop, de Clive-Lowe takes his art wherever it must go, transcending genre boundaries. This is clearest in the album's third track, "Memories of Nanzenji." One can almost feel every leaf swaying above the rock garden. Before that he opens with "The Offering." Like a stick of burning incense, it gives up a steady spirit from a crumbling body before cohering into a low groove. This is followed by "Bushidō 1," in which Johnson soars above rivers connecting one abandoned home to another. On the other side of this ancient coin is "Mizugaki," an improvisation-heavy tune that evokes the massive boulders for which the region sharing its name is known. Here the mood goes from lunar to solar and back again, smoothing some unbridled action from both reedmen into an R&B groove.

After a lovingly arranged solo piano version of "Akatombo," one of Japan's most well-known folksongs, "Niten-Ichi" evokes the classical Japanese sword technique of the same name, moving from internalized to externalized gestures in one flowing transition. This leaves only "Asa no Yume" (Morning Dream) to rest upon the mind in all its Rhodes-infused beauty. A technological sigh of release, it gives hope to restless sleepers.

While such a project could easily fall into a trap of cultural appropriation, in the hands of such capable souls it feels as genuine as breathing. The album is suffused with a rich, warm sound that embraces us from the first note to the last, and focuses on the path more than the destination.