By NORMAN WEINSTEIN
September 20, 2006
Sign in to view read count 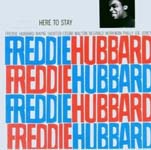 This album has certainly had a sad history. It was left in the Blue note vaults for fourteen years. Then it was reissued in a double-vinyl set with Hub Cap, a coupling that doesn't reveal either session in the best light.Then a decade later, it finally was released as a single album. And that brings us to the present version, on which occasion the devout Bob Blumenthal seems to say in his liner notes (well, he hedges around the fact) that this is just fine, but he'd might rather listen to other Hubbard Blue Notes. That leaves the impression that perhaps Blue Note was right for keeping this in the vaults for so long.

Here's an attempt to redeem "Here to Stay," perhaps one of Hubbard's finest ever, and surely misunderstood as well as undervalued. The case for this album's value can be built simply. Forget the original track sequence. Begin with Hubbard's cover of "Body and Soul," a completely remarkable ballad performance marked for the maturity of the individual interpretation the young trumpeter (who was 24 years old in 1962) brings. Hubbard is thinking hard—harder than most trumpeters double his age have thought—about the lyrics, holding a lot of passion in reserve while maintaining a determined, probing tone. I think only the classic Coleman Hawkins' original recording outclasses Hubbard's reading.

While Hubbard recorded with drummer Philly Joe Jones on a number of sessions, I think their chemistry was never as intensely pitched as on this session, particularly on the opening "Philly Mignon," written by Hubbard for the fiery drummer. This is one of Philly Joe Jones' supreme moments in the studio, and this CD deserves top-drawer billing for that alone. If you listened to "Body and Soul" first, then skip to "Philly Mignon," where you'll drop the cliche of the young Hubbard as all brassy confidence with brio to the brim, and instead hear a mature musical intelligence at work that is as questioning and questing, as conflicted as Lee Morgan's.

Another indication of Hubbard's well-seasoned taste on this session is revealed in using two of Cal Massey's most memorable compositions, "Father and Son" and "Assunta." Listen to the solos by Hubbard and Shorter on "Assunta" and ask yourself if they haven't slipped to a new phase of their growth, apart from Blakey's band at this juncture, that's more darkly introspective.

I hope the album title is true of the recording's fate.