By WOODROW WILKINS
October 18, 2010
Sign in to view read count 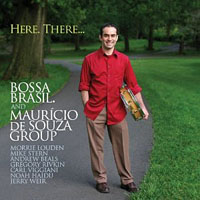 Drummer Mauricio De Souza has roots in both Brazilian music and jazz. It follows that he would issue Here. There ..., a recording that presents both.

De Souza was born in Brasilia, Brazil. Among his inspirations are Buddy Rich, Airto Moreira and Dave Weckl. His two ensembles—Bossa Brazil and Mauricio De Souza Group—are employed here, with well-known guitarist Mike Stern as a guest on two tracks.

"Chovendo na Roseira" is a charming waltz, composed by Antonio Carlos Jobim, known to many as "Tom." Pianist Carl Viggiani leads, with only De Souza and bassist Morrie Louden as accompanists. De Souza mixes in some nifty tom rolls throughout, but it's mostly his crisp cymbals that help this arrangement. During the middle break, the piano softens briefly, allowing the drums to come forth. Even after Viggiani picks up his energy, De Souza continues to drive the pace.

Stern sits in on Milton Nascimento's "Vera Cruz," with Noah Haidu assuming piano duties as De Souza's crafty stick work sets the mood of a train chugging down the tracks. The song has a mellow beginning, aided by Stern's haunting guitar work,but when Haidu steps up, the mood changes and the fury picks up. De Souza gives the entire kit a workout during his solo, then abruptly shifts gears for Stern to come back in, as the entire quartet sizzles during the closing sequence.

The title song, the only original track, features vibraphonist Jerry Weir, trumpeter Gregory Rivkin and saxophonist Andrew Beals. The pace shifts back and forth between mellow and up-tempo., with Beals' alto leading at times, elsewhere blending with Rivkin's trumpet, backing Weir's solo.

Here. There ... is a solid mix of Brazilian music and jazz standards. De Souza is accompanied by a variable lineup, ranging from a basic trio to an ensemble of six. Each musician shines, whether carrying the melody or performing a solo, but they also work well as a group.