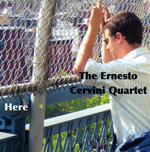 The tone of Here is set by the first crackling track, "Mestropholis," a driving modal tune which showcases Mike Murley (who seems to be everywhere at the moment) on soprano saxophone. Full of energy, Ernesto Cervini pushes the entire band with razor-sharp cymbal work and light but incisive drums.

Cervini is the drummer in Tara Davidson's Code Breaking band, and this release is his debut album, made up of his own compositions. Make no mistake about it, though, this is a drummer's record, not just because of the drum solos, but that everything is driven from underneath. Cervini is partial to bass vamps, sometimes regular, sometimes not, under which he can bubble and push while moving in and out of synch with the pulse. His energy is electrifying, but he does not overpower the proceedings, managing to be extremely tight without being loud.

The album is built around four driving, high-energy tunes: the aforementioned "Metropholis," plus "Bust-Your-Butt Falls," "TGV" and "The Sneaky Two." The latter three tracks share the features of a wicked bass vamp, hair-raising drumming and gloriously free, unfettered romps by Murley and pianist Adrean Farrugia.

"BYBF" starts with a free bass intro that eventually settles into a bass line that sounds faintly Latin (reinforced by the harmonic changes). Farrugia slowly builds his solo as Cervini pushes, while listening closely to the soloist's phrasing. One can almost see Murley rocking as he waits for his turn. He also takes his time over the irresistible groove that the rhythm section has set up, until Cervini virtually explodes with a drum solo that nevertheless maintains contact with the feel of the rhythm. What a terrific group effort.

Murley and bassist Jon Maharaj start the free intro of "TGV" with simple piano support that adds a bit of mystery, since there is no hint where this is going. The players gradually coalesce into a vamp that hints of the previous one but in double time. Once things get going, the feeling is that of a free top played by Murley on soprano with a drop-dead tight bass/drum pair with piano interjections. When Farrugia answers Murley, the texture thins out and allows us to hear how closely Cervini and Maharaj are interacting.

"Sneaky Two" immediately follows the denouement of "TGV," and again the bass vamp sounds related to the others. The beginning is again different from the other two, with the drums almost trading fours with the band. Maharaj is now on Fender Rhodes and the effect is positively eerie as the soundstage shifts left and right. A tremendous groove is set up, with Cervini again right in the middle.

Just when you think Cervini is unidimensional, "February Jenny" appears. A real ballad with a beautiful melody and interesting harmony, this track provides some much needed respite from the rhythmic deluge.

Here is a wonderful debut that showcases Cervini's monster chops and compositional abilities, while Murley once again shows how adaptive and supportive he can be as a sideman.