By Andrew Velez
February 20, 2009
Sign in to view read count 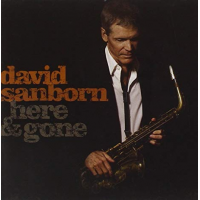 Because his music goes down so easily and is (yes!) romantic, some mistakenly dismiss it as being merely some of that bland pablum, smooth jazz. His relentlessly driving sound on "Stoney Lonesome" is like one long hot breath. If the sound is smooth, it's the smoothness of unpitted heat.

On the opener, he slides into "St. Louis Blues," playing with his distinctive warmth, a minimum of frills and not a single wasted note. He's solidly backed up on this one with a shimmering wall of brass (Keyon Harrold, Lew Soloff and Wallace Roney) as well as Gil Goldstein's funky Rhodes. Later, on "Brother Ray," Goldstein switches over to a Hammond B3, delivering a heavy, rhythmical accompaniment to Sanborn's gospel testimony.

On "I'm Gonna Move to the Outskirts of Town," Eric Clapton jumps in for some very Ray Charles-influenced vocalizing, as Sanborn flavors and accentuates each line with steeped-in-the-blues blowing. With Sam Moore's sweet potato pie vocal on the closing "I've Got News For You," plus more of that Hammond B3 and Sanborn cooking full tilt, it does not seem that they may have left any cobwebs hanging around in the recording studio.