Hancock has so many great and popular albums that the lesser efforts, like this one, are, well, definitely lesser. 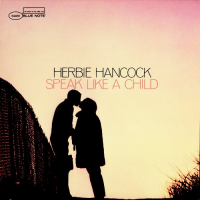 Speak Like a Child feels like the mash-up of two separate albums. One is a lyrical set of three tunes—mellow songs with childhood themes. The other is a standard set of three bop tunes. Both are nice, but the quieter songs are maybe a bit too tame.

Give Herbie Hancock credit for trying something new. He wrote all the tunes. Speak Like a Child is his sixth Blue Note record, and much of it sounds unlike his previous five. The key difference: Three unusual horns—a flugelhorn, a bass trombone and an alto flute —that provide background color to many tunes, but don't take solos. Throughout the record, Hancock is the only solo voice. Everyone else is there for support.

The mellowness starts with the title cut, which, for some reason, is the second on the album. It's melodic and pretty, but nothing that makes you jump up and say, "Wow, let's hear that again!" If your mind is in a wandering mood, this is your mood music. The beat is slightly bossa nova. It feels like lounge jazz.

The theme continues with "Toys," another pretty melody with the horns again playing background support, very much like on a Gil Evans album. It's a mild, cheerful theme and Hancock takes his pretty solos. The final themed song, "Goodbye to Childhood," is as mournful as the title implies. This isn't just pretty music. It's a sad dirge that's actually very affecting. If you're in a sad or reflective mood, this number will be your perfect accompaniment.

Much better, to my ears, are the up-tempo tunes. The album kicks off with a remake of "Riot." It's a fun and adventurous romp—very different from the Miles Davis version, and certainly less riotous. "First Trip" is a terrific and jaunty blues number. For my money, this is my favorite on the record. The whole affair wraps up with "Sorcerer," another remake of a Miles Davis number that Hancock makes his own—happy and bopping.

Speak Like a Child tends to be overlooked in the Herbie Hancock catalog. No surprise there. Hancock has so many great and popular albums—both the traditional kind and the fusion-funk records —that the lesser efforts are, well, definitely lesser. This one deserves a listen for being something out of the ordinary: Simple, but not simplistic.