By Friedrich Kunzmann
November 19, 2018
Sign in to view read count 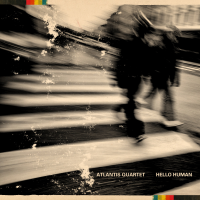 Even though, after 12 years of existence and four critically acclaimed albums, Minnesota-based collaboration Atlantis Quartet has nothing further to prove, the formation presents itself more invigorated than ever. Hello Human showcases a versatile and energetic quartet, presenting 10 originals which span from humble post-bop exercises to punk-infused riff workouts, all the while enveloped by a coherent overall sound.

Just recently guitarist Zacc Harris exposed his appealingly warm guitar tone on trio recording American Reverie (Shifting Paradigm Records 2017), giving his jazz guitar background a gentle folksy touch. While the title track of the object of this review incorporates said character in composition and sound, the opening "Ligaments" testifies to the wilder nature of the group. Saxophonist Brandon Wozniak 's crisp approach complements Harris's more subtle tone with a necessary edge and finds its partner in crime in the swerving drumming by Pete Henning, as heard on the exemplary (in title and sound) "Aggressive Pretender."

"Meridians" finds the group taking it down a notch. Based around a warm and heavily cemented bass-line—reminiscent of the works of French pioneer Henri Texier or his British counterpart Dave Holland—saxophone and guitar take the lead in unison, presenting an extensive theme-rich in triplets and satisfyingly melodic. Both solo with a cigarette-holding attitude while Chris Bates stays faithful to his mesmerizing phrase on bass. Unlike here, many compositions on the record show signs of the harmonic progressions having been established prior to the melody. What the songs' melodies at times subsequently lack in immediacy and memorability, they make up for in opportunity for intriguing soloing—opportunities which are gracefully ceased.

Hello Human displays four musicians that are each at their creative peak, and there are no signs of this energy wearing off. This album should get each musician on the radar, individually as well as together in this formation.