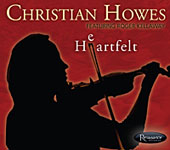 There is always the fear that producing an authentic jazz album with orchestration is too ambitious a project and is doomed under the heaviness associated with such affairs. And that might have been the case here, except the sum of the parts, i.e., violinist Christian Howes and arrangers Kuno Schmid and Roger Kellaway, is certainly more than the instant concept.

For Howes' debut on Resonance Records, he is teamed with legendary pianist Roger Kellaway, the former music director for Bobby Darin and sideman to Wes Montgomery, Clark Terry and Zoot Sims. The veteran and Howes make, as they say, beautiful music together. The violinist has a chameleon-like character with the ability to play outside and in, swing or fusion, jazz and rock. He has been heard lately in the company of D.D. Jackson, Greg Osby, Bill Evans and Les Paul.

Heartfelt is a batch of romantic and playful music that is satisfying on many levels. The orchestrated tracks utilize just the right touches to compliment the playing. The first two tracks, Russ Freeman's "The Wind" and Ennio Morricone's classic "Cinema Paradiso," are given the lush treatment, yet the pure soaring sound of Howes' string and Kellaway's accompaniment are right up front in the mix. Likewise, the introspective Jimmy Rowles composition "The Peacocks" is lovingly rendered with Kellaway and Howes circling each other with supportive, positive notes.

They take up a swinging version of "Alone Together" in a quartet setting. As drummer Nathan Wood (Kneebody) and veteran bassist Bob Magnusson drive the piece, Howes displays his nimble and agile playing, walking toe-to-toe with Kellaway's bebop piano. They pare things down even more with their duet on Benny Goodman's "Opus Half." The throwback stride piano/violin track vibrates energy just like a Stuff Smith rent party probably sounded. Howes' lushness is replaced with a folksy Americana sound that is hard to resist.

Perhaps a signal of coming attractions is the final track with guest, Swedish guitarist Andreas Oberg. This swinging workout finds Howes playing an Octave Geiger, a cross between a viola and cello. This slightly odd sounding stringed instrument situated against the bop burner emphasizes that Howes swings in just about every setting he's placed.

The balance Heartfelt achieves here between solo, group interplay and orchestration is quite remarkable and leaves a lasting impression.

The Wind; Cinema Paradiso; Alone Together; That's All it Was; Invasion of the Forest; Walkin' Up; The Peacocks; Opus Half; Early Autumn; Bernie's Tune.