By Matt Merewitz
October 28, 2003
Sign in to view read count 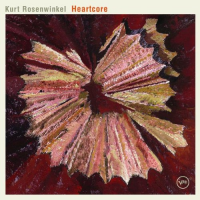 It took long enough, but guitarist Kurt Rosenwinkel has outdone himself on Heartcore, co-produced with hip-hopper Q-Tip. Fans of his seemingly ancient 2001 release The Next Step will love Heartcore for its continuity in the “Rosenwinkelian” vein of brashly inventive and original melodies and harmonies (enhanced by ambient noise and the simultaneous echo of his voice mirroring his fluid guitar lines). Very few tunes are in 4/4 time. Very few tunes sound like anything else he's done before. But they all have the core values of modernity and utter straightforwardness and candor.

For the first time, Rosenwinkel uses digital sampling and programming on a recording that he claims consumed much of the last three years and brings together things that he had been wanting to do for a long time.

The core group of The Next Step (Mark Turner on sax and bass clarinet, Jeff Ballard on drums, and Ben Street on acoustic bass) is supplemented by pianist Ethan Iverson, bass clarinetist Andrew D’Angelo, and flutist Mariano Gil in different combinations.

The title track lays out a straight-up backbeat-driven groove, played – believe it or not – by just the leader and his life-long partner in crime, saxophonist Mark Turner. All that percussion and bass is Rosenwinkel’s computer improvisation. And boy does it work. “Blue Line” is mostly an ensemble effort in an acoustic vein, save the leader’s electronic drums juxtaposed against Ballard’s tempered stick work. It follows the asymmetric quality of “Zhivago” and “Filters” from the last album.

Later, on “Your Vision,” Rosenwinkel steps out of the box with a trance-like state of noise followed by a haunting persistent percussive conga groove. The piece draws on modern electronica as well as the electric qualities of Bitches Brew (thus the ambient bass clarinet drones, squawks, and free runs) and the excesses of psychedelic rock a la Jimi Hendrix or Creedence Clearwater Revival. “Interlude” punctuates the interval between electronic mayhem and the return to the as-a-band format on “Our Secret World,” the only tune on the record where the leader plays only guitar, his home instrument, if one can call it that. “Dream/Memory” shows Rosenwinkel taking an introspective look inside himself and the music, punctuating his musical thoughts with distortions and other noise.

I’ll let you find out the rest for yourself. If this isn’t the future sound of jazz, then I can’t imagine what is.

Heartcore; Blue Line; All the Way to Rajasthan; Your Vision/ Interlude/ Our Secret World; Dream/Memory?; Love in the Modern World; Dcba//>>; Thought About You; Tone Poem.

Matt Merewitz is a music publicist with specialties in new media and traditional print/radio/television. He is a former freelance music journalist and radio broadcaster.