By GENO THACKARA
December 3, 2018
Sign in to view read count 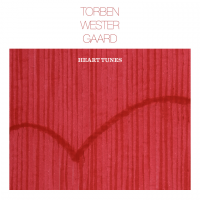 Though Denmark may serve as a home base, Torben Westergaard's musical home can be anywhere new songs and ideas take him. The bassist was figuratively reaching halfway around the world as far back as Brazilian Heart (Self Produced, 1996). Argentina became an unexpectedly prominent touchstone, as the exploratory Tangofied (Point of Departure, 2013) grew into a three-album series joining players from South America and Europe. Fascinating as that endeavor turned out to be, Westergaard clearly felt it was time again for something different, and Heart Tunes certainly throws those expectations for a gentle loop.

A listener following along from that past catalogue will be startled right from the outset here, as it kicks off in a dreamy emo-ambient mood full of lush vocal "aah"s and chiming reverbed guitar. It's an inviting piece of soft ear-candy that washes and drifts away like a spring breeze. Simplicity is the order of the day through the next six tracks as well, from the plain titles to the gently swaying tropical mood throughout. If you don't actually have a warm cabana to pop off to as the sun sets, Westergaard's soothing airs provide a fantasy to at least take your mind halfway there.

If it lacks the complex jazzy structures and interplay of his past recordings, it's simply because Heart Tunes is aiming for something completely different. The recording feels like a series of instrumental musings that naturally grew on their own without any particular agenda in mind. Light calming percussion patterns and wordless singing spin a mood of easy contemplation, while envelopes of synth and lush-toned bass make for an ambience as plush as a pile of downy pillows. It's a little perverse that the only downbeat minor-moment comes right at the end, but Westergaard apparently can't resist playing with our expectations one more time. If we're lucky, it hopefully won't be the last.