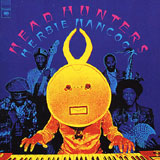 While Sextant (Columbia, 1973) found keyboardist Herbie Hancock dabbling in the electronic soundscapes of the emerging jazz-fusion movement which gained him notoriety as a fusion impressionist aficionado, it was Head Hunters (Columbia, 1973) that propelled him out of the smoky jazz clubs and into the wide-open spaces of arena-rock stardom. Along for the ride is Hancock's company of players: long-time collaborator and reedman Bernie Maupin, electric bassist Paul Jackson, drummer Harvey Mason and, playing a plethora of secondary percussion, Bill Summers. The album—Hancock's second offering to Columbia—became the largest selling jazz album of all time with more than one million copies sold upon its release in October, 1973.

"Watermelon Man" is reborn and stripped down to its funky roots from its more traditional predecessor on Hancock's Blue Note debut, Takin' Off (1962). The song takes on a new shape here—having a tropical feel to it as Maupin's alto flute shimmies along with Jackson's bass guitar backdrop. Hancock's contribution drives the melody, but feels subdued as he generously allows his band mates ample breathing room for a little free improvisation. Collectively, Hancock and his troupe take "Watermelon Man" from its conventional acoustic ensemble origins and transform it into the likes of a stellar tribal jam session.

"Sly" is easily the quintessential funk improvisational free-for-all as Hancock, Maupin and Jackson flex their musical chops, playing in a manic yet structured style. When Mason's drums and Summers' congas merge during the fast-paced measures, their frenzied playing creates a ferocious wall of percussion, adding to the electricity of Hancock's composition, and the sound is, in a word, incendiary.

The album's closer, "Vein Melter," is a piece of nocturnal magic and finds Hancock and his company taking it easy. The keyboardist's airy opus is mingled with Maupin's crooning sax and feels reminiscent of Miles Davis' sleepy classic "So What" from Kind of Blue (Columbia, 1959). Still, Jackson's brazen riffs contain a funk-fusion swagger that wholly separates "Melter" from its bluesy predecessor while still maintaining its traditional jazz roots. The song finds Mason and Summers at the peak of their musical powers. Their contribution is subtle but captivating, as they form a soft wave of percussion in their amalgamation of drums and tambourine, filling out the bottom of Hancock's piece with peaceful nuances and equally gentle rhythms.

Head Hunters took the necessary risks. It would not only go on to pave the way for electronic music and hip-hop style, but Hancock's eclectic sound would cut across to influence other genres of music as well. Moreover, it ultimately changed the way people heard music by opening the door to new musical soundscapes and possibilities. For that fact alone, Head Hunters remains as one of the most sought after, influential jazz recordings ever created.