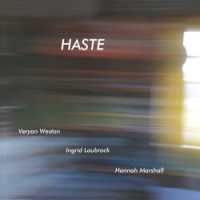 Veryan Weston is one of the most creative musicians in recent times—or, perhaps, ancient times would be closer to the truth, for what is new emanates from the old and what is old gives birth to the new. Weston presides over this conundrum like a medieval apothecary concocting brilliant and powerful and magical potions that take the form of musical scores invented on the spot where time and space collide.

Weston is an artist who follows the prompts of every raw, neural impulse and his music has the pulse of the eternal heartbeat that fibrillates from the centre of his being—his very soul, it would seem. His music is also sharply angled and attracts the life-giving dancing force of solar energy, turning it into a beguiling force that attracts anyone in his musical orbit to invent and create according to the prompts of each of their souls. The result is a masterly force of nature, Haste, a spectacular record where Weston's musical ingenuity meets the talents of saxophonist Ingrid Laubrock and cellist Hannah Marshall.

Laubrock makes light of every challenging gauntlet that is thrown at her by the pianist and cellist. The saxophonist is in a continuous state of flight. In fact, whether or not she is provoked by the pianist, Laubrock develops wings as she swoops in and out of the musical mosaic that she helps to create. Laubrock has a penchant for mixing registers by inventing phrases and short staccato-like lines that appear to begin where Weston's or Marshall's end. She might, for instance, carve out a musical like that is inside-out, or seem to begin a musical sojourn from the middle of a phrase that she and the other musicians have been tossing around for a brief while. The result is a musical geometry that is comprised of a series of shapes akin to wide parabolas and four dimensional elevations that have quite the mystical quality to them. None of this can mask the absolute nature of Laubrock's virtuosity, which is second only to the wild invention of her playing.

It is in the grand scheme of things that Marshall excels both as a soloist as well as an equal partner in the creation of this music that is so alluring and mesmerizing. She is an equal creator of "Sleeping Down Hill," "Leaning Up" and Courtesy of None." Throughout the reading of these glistening pieces, Marshall shows off her sublime technical abilities, which is marked by spectacular passages of pizzicato and con arco playing. Replacing the absolute bass of the music, Marshall nonetheless shows up with brilliant passages where she reinvents melodic lines, provides spectacular harmonic intervention, and sets the pulse around which much of the music revolves. Together, these three musicians have created an ingenious document where past and present collide revealing a glimpse what might be in a not-so- imaginary future.

Sleeping Down Hill; Leaning Up; Courtesy Of None.