BY MARK REDLEFSEN
September 27, 2010
Sign in to view read count 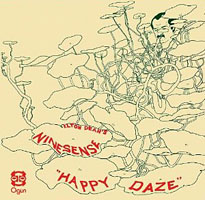 This reissue of two Ninesense recordings, from the late British saxophonist Elton Dean, creates a gateway back to the London jazz scene of the 1970s. Digging into bands that he played with previously outside of his work with Soft Machine, he formed the nine-piece Ninesense with Keith Tippett, along with several other members of that pianist's bands, as well as other players that passed through the ranks of late South African pianist Chris McGregor's band, Brotherhood of Breath, like drummer Louis Moholo-Moholo. Despite being accompanied by an astounding assembly of front-line horn players, Dean never gets lost in the mix as his distinct alto and saxello playing shines right through.

The single-disc reissue combines two albums. Happy Daze (Ogun, 1978), the studio album, transmits a robust power that relaxes at just the right moments. The standout, "Seven for Lee," is a hypnotic and exotic masterpiece with bright phrases and solos blown over a South African-flavored rhythm. There is an overall sense of drama on the studio tracks that contrasts nicely with the looser, more playful vibe on the live tracks recorded on Oh! For The Edge (Ogun, 1976), like "Friday Night Blues."

Dean exploits the full power of his playing, composing and arranging skills in these memorable compositions. His individual style of moving from tonal to atonal in a mere verse is realized on a larger scale. The mood is joyful, as free and traditional currents swish back and forth smoothly to form one larger sound. There appears to be a warm familiarity and trust amongst the members that can be felt inside the music.

Despite the frenetic bursts of energy that each player fires off in solos, the tunes melodically resolve in a more cohesive fashion than typically heard in music from Tippett and McGregor's groups. This amazing band only lasted about three short years, making this welcome reissue an enjoyable reminder of the range of talents possessed by this sorely missed legend.