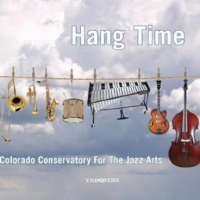 Hang Time consists of music written and performed by two student ensembles at the Colorado Conservatory for the Jazz Arts: Group Giz, an octet directed by trumpeter Greg Gisbert, and Group Gunn, a septet presided over by pianist Eric Gunnison. The CCJA is a non-profit organization "dedicated to empowering youth to creatively express themselves through the language of jazz." Drummer Paul Romaine serves as the Conservatory's artistic director.

Aside from its reassurance that the future of jazz rests on a solid foundation, at least in and around Denver, Hang Time is quite well played and a pleasure to hear. The album's fourteen selections are divided equally among the bands. No one has written more than one composition, and they are by and large well above the norm for students in that age group. Gisbert and Gunnison have nurtured their apprentices well, and everyone in each ensemble—with one exception—is alert and on his toes. The anomaly is Group Gunn's trumpeter, Molly Sauer, who is alert and on her toes.

Group hand-clapping enlivens Alvarez's "The Road Not Taken," inspired by Robert Frost's poem of that name, while "Home," which follows, evokes a big-band ambiance that swings easily, as do the solos by Bodley and Demos, and "Quirkatude" captures the spirit of Monk at his capricious best. Completing the program are alto Daryl Gott's "Pop," guitarist Carlos Snaider's "Outer Space," trumpeter Chris Navarette's "Afterthoughts," Meyer's "Grampma," vibraphonist Mark Clifford's "Art & Judy" and the album's lone vocal, bassist Kyle Bollacker's shuffling blues, "I Won't Be Your Man." As neither group employs a piano, it's good to have Clifford, Snaider and Alvarez to fill in the gaps, ably reinforced by bassists McDevitt (Group Gunn) and Bolllacker (Giz).

A splendid enterprise, especially considering the age and relative inexperience of the musicians involved. The Colorado Conservatory for the Jazz Arts is doing its job well. Long may it prosper.