Red Priest: Handel in the Wind: Messiah and Other Masterworks 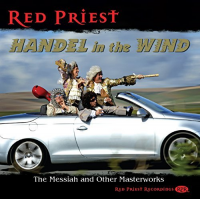 This particular performance of Messiah deserves its own seperate review, in addition to Handel's Messiah 2019. Red Priest, a Baroque specialty quartet named for that most famous Italian ginger of the period, Antonio Vivaldi, has been called: "visionary and heretical," "outrageous yet compulsive," "wholly irreverent and highly enlightened," and "completely wild and deeply imaginative." These expert performers in the field of historically-informed Baroque performance possessed of a collective, wicked sense of humor serves up the creative dichotomy that has already laid waste to the repertoire with their imaginative readings of The Four Seasons (Red Priest Recordings, 2004), and selected Vivaldi on Priest on the Run (Red Priest Recordings, 2003) and Nightmare in Venice (Red Priest Recordings, 2003).

Handel in the Wind is the group's tip of the Renaissance muffin to Il cara Sassone himself, George Frederic Handel. On selections from Messiah, Rinaldo, Trio Sonata in F Major, and the keyboard suites, the quartet demonstrates that less and not more can often mean, well, more. The group's chosen format provides the least number of instruments while achieving the necessary tonal participation. This is what the 21st Century might imagine an emaciated tavern band to sound like on the outskirts of Halle in the early 18th Century. The tempos are brisk, if not whiplash, demonstrating an almost scientific control of articulation by each of the musicians. Peter Piers' recorder playing almost causes time to cease, his playing is so fast. Witness Messiah's opening overture, where the group goes off on a quick percussive clip, winking at the listener all the while. But this is relatively straight playing when compared to the beautifully boozy "Hallelujah" chorus, which is a joy to experience.

Purists will be scandalized by this recording. It is akin to an altered Holy Scripture composed after an opium dream. Smilingly irreverent, thumbing its nose at every one—an Amazon television commercial featured Schubert's "Ave Maria." All manner of criticism of this—because it was somehow not reverent—can be found, implying an insult to the purists' delicate religious sensibilities. That is silly. Anything that disseminates music like this to a larger audience can only be good.