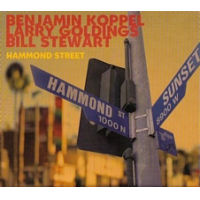 With the popularity of Hammond B-3 organ-based recordings, it's becoming hard to differentiate one from another. Ever since the patriarchal organ sounds of Jimmy Smith's hot greased soul and Larry Young's smooth sophistication, the organ combo has flourished. Copenhagen alto saxophonist Benjamin Koppel offers his spin on the idiom with Hammond Street.

Koppel is a versatile and gifted player who has led ensembles in jazz, crossover and classical music. He's an alto stylist with a tone similar to Phil Woods and Greg Osby; his horn is quick and lyrical. And when you add these attributes to the in-demand drumming of Bill Stewart and one of today's foremost B-3 players, Larry Goldings, the result is more than just your average B-3 grind session.

On eight originals and a cover of Stevie Wonder's "Make Sure You're Sure, Koppel leads the trio in a what feels like a live setting where the interaction among the musicians creates an utterly enjoyable atmosphere. There's a some experimentation on "H.T.E.S.T.A.C, where Goldings pulls off a cathedral organ timbre, and some heavy bop on "Ostrich Itch, where the trio engages in playful communication and unexpected solos, wrapping the piece up with an abstract ending.

The ballads "Jetlag and "Holtemmen are alluring and poignant, with Koppel's soulful sax burning against luxuriant backdrops as the trio plays with intimacy. They swing hard on "Pasadena Pancakes and close the set with "Coconino County (Part II ) —a prime cut of savvy and groove-inspired music.