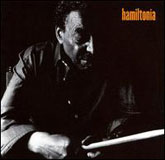 Defying conventions even in the mildest of musical settings can define a path to innovation. For drummer Foreststorn "Chico Hamilton, blazing a trail within his own dynamic language, sometimes reflecting his heritage, has been a lifelong tradition.

On Hamiltonia, octogenarian Hamilton has chosen a group of originals from four 2006 recordings to summarize a view of his musical personality. The lack of presumption in both his musicianship and his compositions propels an unmistakable sound that is free-flowing, steadfast and often downright upbeat.

In his history as a bandleader, Hamilton has created groups that have featured some of the greatest musicians of our time, like Eric Dolphy and Ron Carter. And Hamilton has also targeted certain instruments to mold the character of his music. Hamiltonia demonstrates the variety of choices Hamilton has made.

Given the interplay between the lead guitar and Fender bass throughout the compilation, it is evident that the guitar plays a significant role in Hamilton's sound and is the basis for sculpting his bands without piano. It is from this place that Hamilton can essentially incorporate any instrument that he desires in order to satisfy his compositional intentions.

From the very outset, with "Chicano Heritage, it is clear where Hamilton himself sits within the stream. He moves from rendering perpetual snare figures, to inscribe a backdrop on which instruments can ride, to wielding an unyielding stick to metal drum edge pulse to support the guitar and horn interplay on "How's Your Feelings. He can regulate the pulse with a blatantly countable meter ("Mulligan Stew and "Jeffrey Andrew Caddick ) that is typically restrained yet simultaneously powerful. On "Lu Tu, he shows how easily the rhythm can shift, more than on any other cut. Using the mallets with exemplary aplomb, Hamilton melts all potentially hard edges with the reverberation that resounds from the skins in "Just Play the Melody, the only track to feature a drum solo.

Hamilton's selection of woodwinds, from flute to baritone-sax, provides a wide tonal range outside of his standard guitar/drum group. The horns carry the theme prominently on most of the numbers. They endow the soundscape with synchrony and the relaxed, lilting sensation that contributes to the familiar texture within Hamilton's signature music.

On this album, the vocals offer well-placed appendages to the instrumental backbone. From a film score he partially composed, Hamilton sings the brief "I Hardly Knew Her At All, while Fontella Bass swings with "Believe in Him. And on the last track, Hamilton belts the chorus of "Conquistadors 2007 which is as alive and groovy as anyone could ever want.

In Chico Hamilton, drummers have a model in which the seemingly contradictory principles of being the pulse of the music and being within the music is so evenly personified. The backup of decades of experience keeps this skillful musician young-at-heart, dedicated and resultantly one of the true "conquistadores!

Chicano Heritate; Bones, No Meat; How's Your Feelings; Spring Again; My Brother Don; Lu Tu; I hardly Knew Her At All; Arroyo; Mulligan Stew; A Little Bit of This, A Little Bit of That; One for Arnie; Believe in Him; Just Play the Melody; Jeffrey Andrew Caddick; Conquistadors 2007.