By BRUCE LINDSAY
December 4, 2013
Sign in to view read count 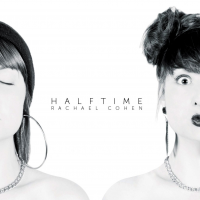 The Shetland Islands, way up north off the coast of Scotland, have a long and noble history of producing fine folk and roots musicians. They've never really garnered plaudits for their jazzers, but that might be about to change. The islands were home to saxophonist Rachael Cohen for the first dozen years of her life and on the evidence of debut album Halftime those pre-teen years have helped to develop a promising new talent.

So who's accompanying Cohen on her debut recording? There's a hint on the CD cover, where the saxophonist thanks "Phil, Calum and Jim" for their musicianship, but nothing more. A guessing game might be fun, but the press release eliminates the need for such fripperies. The quality of the players is apparent from the first few bars of "The Manor," but for the record, there's Phil Robson on guitar, Calum Gourlay on double bass and James Bashford on drums. Robson is the best known and most experienced—he's played with Christine Tobin, Mark Turner, and Barbra Streisand among others—but Gourlay and Bashford are no slouches.

Ornette Coleman's "Just For You" is the album's only cover tune. It's slinky and cool, Gourlay's relaxed walking bass anchoring the tune as Cohen weaves a snaky lead line. The rest of the tunes, all Cohen originals, range from the skipping nonchalance of "Groove Envy"—featuring Gourlay's excellent bass solo—and "Riggins, Higgins?" to the gentle "Intermission," the lyrical "Full Time" and the jagged edginess of "Free Speech." "Ask Me Later" is another gentle tune, but this time Cohen brings a subtle swing to the melody and Robson's guitar sound is at its warmest and most engaging.

"Window Watcher" opens with Cohen's unaccompanied sax, the microphones picking up the clatter of the keys as well as the rich, rather lonely sound of the instrument. When the other musicians join in they retain the meditative feel of the saxophone until half way through (halftime?) when the tempo and the energy leap up. The first half is in many ways the most impressive few minutes on Halftime, a measure of Cohen's maturity as a player who's not afraid to leave her sound exposed and who's aware of the importance of space and emotion.