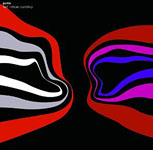 It's becoming increasingly difficult to keep up with all the cross-pollination going on in Norway. Take the members of noise improv rockers Puma. Keyboardist Øystein Moen is a current member of Jaga Jazzist, a group on the comeback trail with its first release in five years, One-Armed Bandit (Ninja Tune, 2010). Guitarist Stian Westerhus—who was recruited by JJ at the same time as Moen—has since left the progressive jazz/rockers to focus, in addition to heavy touring with trumpeter Nils Petter Molvaer, more time to his career as a solo performer, with a recent Nattjazz 2010 show and the release of Pitch Black Star Spangled (Rune Grammofon, 2010) clear indicators of rapid upward trajectory. Drummer Gard Nilssen, recently heard with trumpeter Mathias Eick's twin-drum quintet at Nattjazz 2010, can also be found on guitar power trio Bushman Revenge's Jitterbug (Rune Grammofon, 2010), in addition to more free jazz environs with Zanussi Five and Lord Kelvin.

And so, what to make of Puma, an occasional confluence of players who—individually and collectively—comfortably traverse everything from free improvisation to detailed structure? Half Nelson Courtship builds on the strengths of the trio's 2007 debut, Isolationism and 2008 follow-up, Discotheque Bitpunching, both on the lesser-known Bolage Records, and builds is absolutely the correct term. Freely improvised this music may be—music where noise is a fundamental, but not without surprising variety—but that doesn't mean this often hard-edged, certainly best-experienced-loud music lacks direction. In six minutes of reckless abandon, "Innamorati Osculati" moves from industrial sonics, and long, feedback-driven phrases of unexpected beauty, to denser washes of sound, driven by Nilssen's increasingly tumultuous kit—and, ultimately, an ear-shattering finale of aggressively strummed guitar, and a low-end pattern from Moen that creates sudden harmonic context for all surrounding it.

And it's not just individual tracks that possess their own curious arcs; the entire 42-minutes of Half Nelson Courtship works as a whole. Some tracks seamlessly morph from one to another, but elsewhere silence is briefly used to build the album's narrative, as at the end of the relentlessly thundering "Knitstep," where a fade to black provides a darker hole in which the ethereally landscaped "East West Horizontal March" can begin, with Moen's Sci-Fi synth, Nilssen's tympani-like drums and the utterly impossible-to-pigeonhole Westerhus, who blends a seemingly infinite array of effects with complete and utter disregard for his instrument's orthodoxy. All this in a foreboding build to the album's closer, "Hachioji Silk Blues," where Westerhus' jagged, single-note lines are bolstered by Moen's slowly, almost spiritually ascending chords, building to a dramatic climax that ends with the brief but perfect decay of Moen's utterly huge church organ.

Within the innovative context begun by Supersilent in 1997, the realm of Norwegian noise improv has expanded almost exponentially, turning into a sub-genre of remarkable breadth. This fearless trio may be relatively late to the game, but with albums like Half Nelson Courtship, Puma is proving itself a key player, especially Westerhus, who is on a rapid climb as one of Norway's most important new voices.