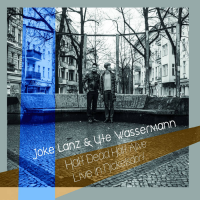 Swiss noise musician, performance artist & turntablist Joke Lanz and German vocalist, composer & sound artist Ute Wassermann have been working as a duo for some time; Half Dead Half Alive (Live in Nickelsdorf) is their first album release together. As the title suggests, it is a recording of their performance at the 2019 Nickelsdorf jazz festival, one which garnered considerable praise. The album comprises two tracks which play for just over thirty-six minutes, suggesting that they represent the duo's full concert set.

The tracks show the pair to be well-suited, with improvising styles which complement one another and fit together like a jigsaw. Lanz' turntable work calls to mind that of Christian Marclay, this being emphasised by the fact that both have independently recorded in duos with the New York-born vocalist Shelley Hirsch. At the turntable, Lanz thinks and reacts quickly, thus being able to create compatible environments for Wassermann's voice and sounds in real time, without any clunky jump cuts. (See the YouTube clip below for footage of the pair at work.) As Wassermann herself thinks and reacts just as rapidly, the end result finds the two so in step with one another that neither seems to be leading the other. Perfect symbiosis.

For the listener or spectator, the end result is a full, but uncluttered, constantly shifting, kaleidoscopic soundscape with frequent rhythmic passages alongside vocal effects, bird whistles, ethereal banshee wails and sounds which could have emanated from either of the two. As such, it is an aural roller coaster ride which makes compelling listening no matter how many times it is repeated. This is a duo to look out for, whether on record or in performance.

Half Dead; Half Alive.