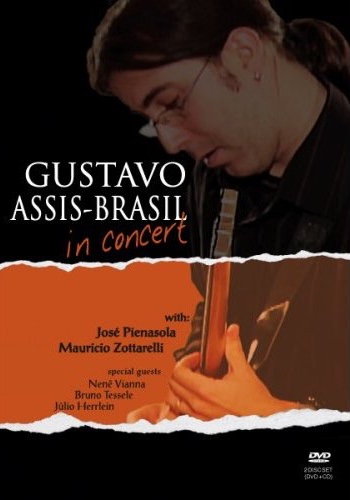 There is much to be said for presenting material live as opposed to recorded in a studio, particularly if improvisation is at the core of a group; pianist Keith Jarrett's trio has been doing this to great effect for years. On this DVD/CD double disc, Brazilian guitarist Gustavo Assis-Brasil, in trio setting, displays the chemistry and excitement generated by a one-take performance in the company of like-minded musicians. The twelve original compositions were recorded in Santa Maria, Brazil, his hometown, in front of a respectful and appreciative audience.

Assis-Brasil has authored two books on his unusual, hybrid plectrum and finger-picking technique but this DVD doesn't really reveal any secrets. In the end, how the strings are manipulated is of less significance than the brain behind the technique. Technically impressive without a doubt, Assis-Brasil forges elaborate, heady runs, though in just the right doses. The lasting impression from these dozen tunes is one of compositional strength and fidelity to form, harmony and melody; in this respect there are many echoes in Assis-Brasil's music of Pat Metheny, circa Bright Size Life. (ECM, 1976)

There is also a touch of Stanley Jordan about Assis-Brasil's more extravagant excursions, but the combination of quiet, understated play and bursts of quick-fingered athleticism makes for a personal and quite unique style. One has the impression that Assis-Brasil can do whatever he chooses on his instrument; to have such mastery, and yet to exhibit such taste and restraint is an admirable facet of his playing.

When he does stretch out—and you can take your pick of any number of impressive solos—his improvisations are like brief sonic sculptures, framed as they are by the lovely chord progressions and seductive melodies at either end, which characterize and form the body of the songs.

On most of the tracks, bassist Jose Peinasola and drummer Mauricio Zottarelli provide more than just a solid foundation: Peinasola's subtle playing, as unhurried as a native of the tropics on an evening stroll, contrasts with the more animated approach of Zottarelli, whose solo on "The Same Day," brimming with ideas and played with palpable enthusiasm, is a highlight of the set. There is undeniable empathy among the three, and they have that tight-but-loose air, the freedom that comes with knowing each other's steps so well.

Gustavo Assis-Brasil's strong debut as leader has little overt Brazilian accent; it is music steeped in the American jazz tradition, but it succeeds in sounding vital and fresh, due in the main to Assis-Brasil's writing skills and his wonderful playing. A name to watch out for.