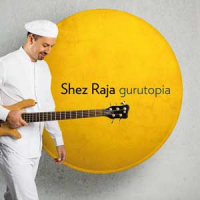 With its aggressive combination of jazz, rock, and funk, fusion has remained a contemporary sound in a state of constant reinvention, introducing a fresh audience into the fold, bringing with them futuristic attitudes and perceptions. This electrified mutation of jazz, has seen its share of imitators, yet, when properly performed, remains vital. Shez Raja has taken his power-bass imbued sound well past established parameters, merging diverse inflections of raga from Indo-jazz, into the funk/groove format with intense consequences. Releasing four solid albums out as leader of the Shez Raja Collective, the bassist continues his exploration of sonic potentials on Gurutopia, a prime example of musical vigor achieved at a high level.

Bringing guitarist Mike Stern along as guest on "Rabbits," offers Raja the opportunity to exchange solos with someone who is well tuned into electro-streaked dynamics, and elevates the session with his inclusion. Stern returns on "RocknRolla," a blues based rocker, where he absolutely shreds. Again, the animated chemistry with Raja is evident, and he is the perfect guitarist for the song. Another major player called in is trumpeter Randy Brecker who is featured on "Sketches of Space," which commences with a notable Latin cadence, before it goes through a floating atmospheric transformation. "Primetime," brings Becker back, playing against a fierce funk backdrop. Steve Pringle on the Fender Rhodes adds a nostalgic tinge to this track as well as on "My Imaginary Friend," a pile driver where Raja brings out the wah-wah pedal for maximum effect.

Special guests aside, the core of the Raja ensemble is as versatile and proficient as one could expect. They bring their Indian influence into "Maharaja," where violinist Pascal Roggen and keyboardist Alex Stanford play dominant roles. "Song For John," is a moderated number where vocalist Monika Lidke soothes the violins arrival, presenting a tranquil scenario. Lidke does an encore with an invoking chant on "Shiva Mantra," while saxophonist Vasilis Xenopoulos renders vivid pacific imagery on this Hindu oriented composition which concludes the repertoire.

Fusion has been around now for almost fifty years, and numerous players came up with it as the soundtrack of their lives, Raja among them. He personifies the modernization of jazz, and his ensemble utilizes electronic and technical enhancement in a wise and effective manner. Though personally seeking a path of self- expression and awareness, Raja is fearless as a musician, therefore, his music should be played at optimum volume levels for greater appreciation.