BY JOHN KELMAN
October 5, 2008
Sign in to view read count 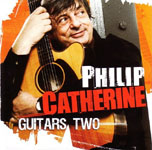 Sometimes it's not a good thing to get branded too early in your career. Called "the young Django" by Charles Mingus and operating in the same fusion sphere as John McLaughlin and Larry Coryell, Belgian Philip Catherine was pegged in the '70s as a firebrand guitarist, albeit an unabashedly lyrical one. Not that there's anything wrong with that, but Catherine's career, now nearing its sixth decade, has always been about a lot more than powerhouse fusion chops, something Guitars Two demonstrates in spades.

Catherine's virtuosity is never in question, especially when he occasionally lets loose with a flurry of notes near the speed of light, but Guitars Two is largely a pensive affair. Multi-tracking himself on two (and sometimes more) guitars, with some occasional subtle processing to broaden the landscape, Catherine winds his way through eight originals, alongside tunes by John Lewis, Guinga, Nicolas Fiszman and longtime Django Reinhardt musical partner Stephane Grappelli. Going beyond the simple idea of one guitar accompanying the other, Catherine creates a "guitar as orchestra" vibe where, while he does indeed solo over an accompanying track at times, the guitars more often than not coalesce into a unified sound where it can be difficult to differentiate between them.

Catherine's reverence for the tradition is up front on Lewis' "Skating in Central Park," where the guitarist weaves elegant melodies through the late Modern Jazz Quartet pianist's graceful changes. Grapelli's "Souvenirs de Villingen" is a painfully beautiful ballad that comes in and out of tempo, gently blending two acoustic guitars to pay tribute to both Grappelli and Reinhardt's Gypsy jazz. Catherine looks towards Brazil on Guinga and Aldir Blanc's swaying bossa, "Lendas Brasileiras" and the miniature, "Aria de Opereta," where the cultural references remain but are subsumed in a darker complexion.

But it's on Catherine's originals where the guitarist creates a broader soundscape, the warmly reverbed electric guitar on the soft "Toscane" a soft cushion for his simple melody and long, sustaining notes. The mix of acoustic and electric guitars on the more propulsive "Pendulum" is almost seamless, while on the near-ambient intro to "Pourquoi," Catherine uses a volume pedal to create rich chordal swells that set up the entry of acoustic guitars. A melody emerges, with the guitarist's lightning fast runs creating a delicate tension that's released as the piece moves into its second, more clearly thematic section before returning to the more atmospheric texture of its beginning.

Catherine's ability to reference traditional markers from Reinhardt to Wes Montgomery, while sounding like nobody but himself, makes Guitars Two the kind of career high point that ought to dispel the guitarist's early branding. The qualities that established his reputation remain, but are subsumed in a broader approach that makes Guitars Two deserving of a place alongside Pat Metheny's New Chautauqua (ECM, 1979), Bill Frisell's Ghost Town (Nonesuch, 2000) and Joe Pass' '70s Virtuoso series on Pablo, as a pinnacle of what can be done by one man and a handful of guitars.