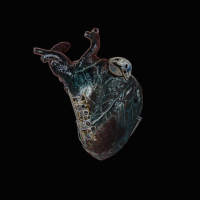 Seamus Blake was born in 1970 in London, England but raised in Vancouver, Canada. He studied jazz at Berklee College of Music and following his graduation moved to New York Cit, where he became a fixture on the jazz scene including being a member of the Mingus Big Band. He's played or recorded with Victor Lewis, John Scofield, Chris Cheek, Bill Stewart, Ethan Iverson and Dave Douglas and appeared as a sideman on over 70 albums.

In 2017 Blake assembled a new quartet, The French Connection which included Tony Tixier on piano, bassist Florent Nisse and Gautier Garrigue on drums, all three, unsurprisingly, hailing from France. They recorded their first album in Paris in November 2017 and this is Blake's debut for Whirlwind Recordings. Following in the wake of Blake's 2016 album Bridges (AMP) and 2015's Superconductor (5Passion), Guardians Of The Heart Machine opens with the title track that's distinguished by a lustrous, memorable melody. Blake's tenor saxophone dominates on "Vaporbabe," alternately limpid and coruscating. Meanwhile the Thelonious Monk-ish "Betty In Rio" is an exuberant tune with a lithe, indelible hook line.

A point of difference arrives with the closer "The Blasted Heath," Blake's fragile, plaintive vocals subtly melding with piano and bass. The feeling here is not unlike the recitative populating several sections of Carla Bley's Escalator Over The Hill (JCOA, 1971), which makes Blake's unusual delivery all the more appealing. The album's mood is comprehensive, ranging from the mellow ballad "I'm Okay" to the angular "Lanota," but all sharing the unifying characteristics of sheer bravura performances and satisfyingly assured compositions.