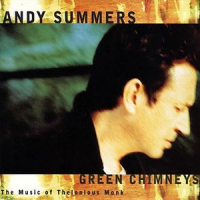 What an albatross to have the Police hanging round your neck. So when it's all over, the singer gets even more famous and corners the market in sophisticated JazzRock, the drummer gets on with spending the money and stretching into movies and session fun, and the guitarist gets to play whatever he wants.

Which has varied from turn it up Progressive Rock to echo Summers' days in the Soft Machine to delicate Blues and Folk experiments. But Green Chimneys is another matter: it's a fine, accessible homage to the immortal Thelonius Monk from a British club jazzer who got very lucky in pop.

Monk's mastery of compositional architecture - from the blues to the birth of bop - lifts good players toward the stars. On Green Chimneys, Summers even gets Sting in to schmooze his way through one classic, 'Round Midnight. Except that Sting gives an affecting, genuine performance, while Summers' bigger band strip down to etched-naked chords and sinister brushes waiting for Andy's "do I not like that?" solo.

Add cello, trumpet, saxophones and organ to a guitar trio, and you never know what colour comes next. Evidence leads with a fat, tight horn trio stating a fast funk theme against Summer's stinging blues leads, dissolves into big band call and return, segues into a blues rock chorus or two and dances out of the room heading for where Jeff Beck plays Mingus. Then there's the Pat Metheny-on-that-peyote-he-got-from-Tom Waits of Bemsha Swing, or the New Orleans funeral band - on Hackensack - plugging directly into a mobile 240AC outlet while Joey DeFrancesco's B3 vamps its way through the crowd on a flatbed truck right behind the hearse.

Or the way the band rhythmically collapse Three Blind Mice into the angular, stop-time Jazzfunk of Monk's Dream, and the outrageous blend of Metal and Jimmy Smith on Shuffle Boil, where Summer's tone and phrasing deliver the impact usually carried by distortion.

This is a guitar fan's album, but if the straighter moments of Zappa's methodical madness and subtly-caged playing ever tickled your sweet spots, Green Chimneys will make you happy too. And if you saw Peter Erskine drum with the Yellowjackets in London recently, his endlessly inventive accents and effortless leaps from supportive to lyrical to driving to painterly will be a joy revisited.