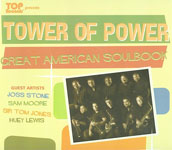 For more than 40 years, Tower of Power has been thrilling audiences with its brassy sound. Whether as a stand-alone act or backing up another group, this 10-piece ensemble has crossed many genres, including blues, pop, jazz, funk, rock and soul.

Having worked with such a diversity of acts as Aerosmith and Spyro Gyra, the band has accumulated an extensive repertoire. Now, tapping into a recent trend of artists remaking old hits, Tower of Power puts a slight twist to it. Great American Soulbook is a set of 12 vintage songs, including a few obscure releases, remade with some assistance from vocalists Tom Jones, Joss Stone, Sam Moore and Huey Lewis.

Joss Stone joins Braggs for a duet on "It Takes Two." Bassist Rocco Prestia and drummer David Garibaldi are a little more involved, with Politzer soloing as well.

The arrangement of "Me & Mrs. Jones" is mostly faithful, though a bit more leisurely. Braggs matches Billy Paul's original notes, but adds plenty of his own inflections. He adlibs a bit during the closing monologue, saying, "You're my lady," and "You know I love you, Mrs. Jones."

Stone returns for the ballad "(Heaven Must Have Sent) Your Precious Love," one of several songs presented here that were popular in their day but have gotten little attention since. Stone and Braggs play off each other well, capturing the charm of the original while adding some of their own.

The "Tower of Power Horns" have gotten so much attention over the years that it's regrettably easy to overlook the rest of the band. Great American Soulbook scores the double hit of reminding music lovers of the band's diversity while rediscovering some classic soul.

You Met Your Match; I Thank You; Loveland; It Takes Two; Me & Mrs. Jones; Star Time (Tribute to James Brown