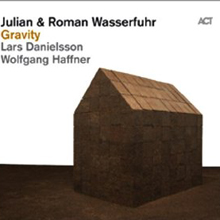 Julian and Roman Wasserfuhr, trumpeter and keyboard player respectively, started their recording careers early. They recorded their debut, Remembering Chet (ACT, 2006), under the heading of Young German Jazz, when Julian was 17 years old and Roman was barely 21. Even though the brothers are still in their early and mid-20s the "Young" element of that title has gone—and rightly so, for their third album, Gravity, is a stylish recording of atmospheric, laidback jazz.

The brothers' maturity shines out, manifested in the controlled command of their instruments and the absence of over-long solos or technique for its own sake. The rhythm section—bassist Lars Danielsson and drummer/producer Wolfgang Haffner—bring years of experience to the quartet and give the brothers a rock-solid and totally reliable musical foundation.

The Wasserfuhrs' debut was a tribute to Chet Baker, an early musical influence on Julian. Till Bronner is another of the younger brother's influences, and it's his sound that shows itself most noticeably in Julian's playing. The music is spare: there's almost a sense of silence as the fifth instrument, especially on "Gravity" and Danielsson's sadly reflective "If The Rain Comes." "Branca" and "Midnight Walk" move along happily, thanks to the gently funky shuffle provided by Haffner. The only tune that really finds the band upping tempo and urgency is "Ramos Us," and even here Julian stays cool for the most part, leaving Roman, Danielsson and Haffner to drive ahead with a rolling beat.

Sting's "Englishman in New York" is well-mannered and smooth—perhaps a bit too smooth. The elegant and stylish subject of the song, Quentin Crisp, was impeccably well-mannered himself, but he always wanted to make an impact and this version is a little too respectable to do that.

Gravity is beautifully produced by Haffner, giving each instrument the clarity it deserves. The quartet is a graceful ensemble, the sound is gentle and engaging, the tunes melodic and warm. The Wasserfuhrs' talent and style belie their relative youth and bode extremely well for their future.