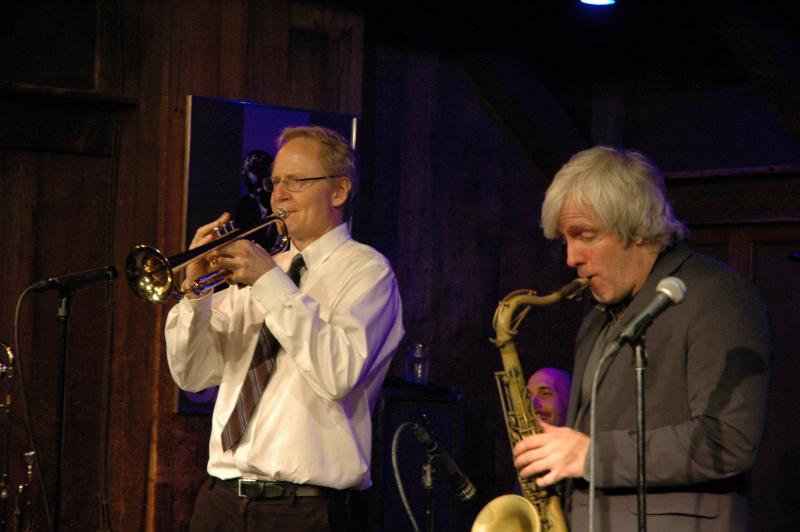 In this supremely swinging hard bop set, Toronto-born New York saxophonist Grant Stewart joined long-time Philadelphia musicians: organist Lucas Brown, drummer Dan Monaghan, and special guest John Swana to knock out standards with a rare execution that was as tight as what might be the final takes on a recording date. The event was notable for Swana's first-time return to trumpet after several years following an embouchure problem that led him to play valve trombone and EVI (Electronic Valve Instrument). It was thrilling and nostalgic for Philly jazz fans to hear his special trumpet sound again. (Swana told this reviewer that he gradually recovered his embouchure through intensive practice, a heroic recovery considering that many players never pick up the instrument again when this occurs.)

Saxophonist Stewart more than lived up to his stellar reputation, playing, as Michael West of Jazz Times wrote, "steady swinging, muscular hard bop." West noted that Stewart's sound is "lean and sinewy, yet flush with lyricism, humor and rhythmic possibilities, much like tenor icons Dexter Gordon and Sonny Rollins, to whom Stewart is frequently compared." Mark Stryker of the Detroit Free Press couldn't have described Stewart's special qualities better: "What separates Stewart from so many of his peers stuck in the quicksand of hard bop nostalgia is the sheer creative spark and spontaneity of his solos. When Stewart gets hot the questions of individuality evaporate amid the in-the moment thrills of his invention." These observations accurately describe Stewart's playing on this night.

The ease with which Stewart created fascinating lines won the audience over from the very first notes of the Camelot perennial, "If Ever I Would Leave You," where Lucas and Monaghan also had opportunities to show their wares. Swana joined the group on trumpet for "Yesterdays." His sound was as fresh and full as ever, as he created phrase after phrase with consummate craftsmanship. Stewart swung brightly in a double time version of "The End of A Love Affair," which Dexter Gordon made his own in his Carnegie Hall concert of 1978 (release on Columbia, 1998). While there were touches of Gordon and of Rollins in Stewart's improvisations, the inventiveness was his own, his solo interspersed with hemidemisemiquavers that were the epitome of rapidity. By this time, as he traded eights, it was clear that drummer Monaghan was totally in his element with this group. He showed himself to be a master of hard bop rhythmic swing. Who knew?

On the ballad, "Laura," impeccable phrasing by both Swana and Stewart gave the standard a fresh luster. The group then went back to the origins of bebop for Dizzy Gillespie's "Woody'n You," with Swana on valve trombone. Swana then returned to the trumpet for Kenny Dorham's "Una Mas" where the creative connection between Dorham and Swana became crystal clear. The set concluded with Sonny Stitt's "The Eternal Triangle," a rocking version, with Swana on valve trombone, and in which Monaghan provided a phenomenal drum solo that brought the house down. In a way, the whole set belonged to Monaghan, as it was his rhythmic pulse and unstoppable ingenuity that enabled the group to relate so comfortably to one another.

Set List: If Ever I Would Leave You; Yesterdays; The End of a Love Affair; Laura; Woody'n You; Una Mas; The Eternal Triangle.