Maximize your visibility at All About Jazz by upgrading your musician page from standard to premium. With it, you'll receive All About Jazz home page exposure, a highly stylized / ad-free musician page with bonus features and benefits, an ad, plus you control where you sell your music and so much more.
Learn More
352 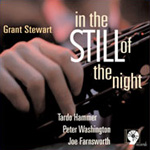 Soloing on the title track of In The Still Of The Night, tenor saxophonist Grant Stewart plays scads of notes over a rhythm section traveling at warp speed. But while his stamina and ability to think fast at a nearly impossible tempo are impressive, this tenacious blowing doesn't hint at the depth of Stewart's work on the rest of the disc's eight cuts—when the pace is more temperate, there's an opportunity to hear the things that really matter.

Stewart's thickset tone often gives the impression of exertion, as though the notes are being pushed into place. Changes in velocity and timbre enhance rather than detract from the narrative flow of each of his solos. Most importantly, in a program consisting mostly of standards, the absence of pyrotechnics makes the music accessible, heady and thought provoking.

Taken at a smoothly swinging, slow-to-medium tempo, Stewart's treatment of "Theme For Ernie swaggers a bit, yet retains the wistful ballad flavor associated with Fred Lacey's minor classic. Just below the surface, pianist Tardo Hammer's insinuating chords add another dimension. For the first sixteen bars of his improv, Stewart eases his way into the depths of the song. Often using silence as punctuation, he pieces together short phrases, pausing in places where many players would simply ramble on. As he builds up steam and the solo continues, a favorite device is to burrow through a long sequence in the horn's middle register and then cut loose with some pithy, high pitched cries that return to firmer ground instead of reaching the expected climax.

Following a lovely reading of "Autumn In New York, the rhythm section shifts to a middling tempo and Stewart takes four memorable choruses. His solo is one long, steady, purposeful letting go of constraints. As always, he forsakes extended, histrionic flights in favor of brief, swelling peaks that are invariably tied to the next idea. The melodies that spring from Stewart's horn sound fresh and spontaneous; and he always retains the spirit of Vernon Duke's iconic song. At the start of the third chorus, drummer Joe Farnsworth switches from brushes to sticks, and bassist Peter Washington starts walking. Stewart responds by taking things up a notch or two, but remains elegantly self-possessed.

Stewart transforms Lerner and Loewe's "If Ever I Would Leave You into a joyous romp. Following a jaunty handling of the head, his solo never falters—this is up-tempo playing that's genuinely exciting without trying too hard or aiming for catharsis. There's a fluid, graceful quality in the way Stewart works through the tune's changes that contrasts nicely with the horn's somewhat rough sound.

Over the past several years Stewart has recorded a few discs as a leader, a pair with Reeds And Deeds (a band co-led by fellow tenor saxophonist Eric Alexander), made dates led by Rochester, New York jazzmen Mike Melito and Bob Stata, and was featured on last year's exemplary debut by Spike Wilner's sextet, Planet Jazz. While all of these sides are fine showcases of his talent, In The Still Of The Night stands as a benchmark of Stewart's progress as a soloist and bandleader. A great record.


Tracks: In The Still Of The Night; Theme For Ernie; Wives And Lovers; Autumn In New York; If Ever I Would Leave You; Work; Lush Life; Loads Of Love.