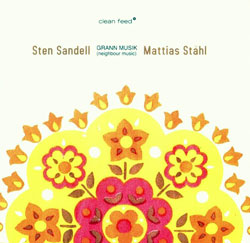 Master Swedish improvisers, pianist Sten Sandell and vibraphonist Mattias Stahl, radiate gobs of colorific contrasts via these freeform-based duets. At times fluid, introspective and somewhat jagged in scope, the artists pursue the art of intuitive music-speak during the prevalence of this 2008 outing.

On " Sjöfortet," Sandell executes cascading block chords with the semblance of a classical pianist gone awry, while Stahl's contrapuntal statements inject a myriad of prismatic effects. The duo works within a similar musical plane throughout these eight works. They conjoin, detach and soar skyward as Stahl enhances the total effect with his use of marimba and glockenspiel. To that end, they merge resonating improvisation with multidimensional fabrics of sound.

This album communicates a fusion of fascinating propositions that approach from innumerable angles. More often then not, the duo dances and darts around some imaginary perimeter. Whether they engage in flirtatious exchanges or zoom in for the kill, the instrumentalists conjure up a feast for the mind's eye that provides the winning edge.

Sandell is a master of restraint amid his shrewd use of space, whereas Stahl zig-zags across his vibraphone to assist with conveying a seamless—or perhaps transparent—tiny-group methodology. Sparked by asymmetrical rhythms and unorthodox phrasings, these folks subliminally intertwine minimalism with heated jazz improv to offset the overriding, freedom-of-expression mode of attack. Few can pull it off and sustain interest at the level evidenced here.