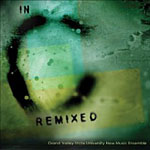 It's not only one of minimalism's early classics, but Terry Riley's seminal "In C," composed in 1964, could also be described as an early foundation for the modern concept of remix. 53 musical fragments—as brief as three notes and as long as 18—are performed by an ensemble of no fixed size; the only instructions being to begin with the first and end with the last fragment. How many times each one is repeated by each player, where they place the downbeats and how long they rest between fragments is completely up to them, making "In C" a piece of indeterminate length (the original 1968 CBS album is 42 minutes; the New Albion 25th Anniversary version over 75).

What makes "In C" so remarkable is that, no matter how large or small the ensemble, and no matter what the instrumentation, the seemingly infinite permutations and combinations of Riley's 53 fragments—especially effective when performed by musicians adept at improvisation—always come together in uncanny and unpredictable consonance. It's no hyperbole to say that every performance of "In C" is different, and in some ways a live, in-the-moment remix of what Riley provides on the written page.

Along with Steve Reich's equally definitive "Music for 18 Musicians" (1976), "In C" is one of minimalism's most often-covered compositions, and so it's no surprise that, following its successful look at Reich's classic—Steve Reich: Music for 18 Musicians (Innova, 2008)—Grand Valley State University New Music Ensemble (GVSUNME) and its director, Bill Ryan, have chosen to tackle Riley's enduring work. But instead of simply aspiring to deliver a unique look at "In C"—and, with a 17-piece ensemble weighted heavily on percussion instruments but also featuring less common ones including guitar and accordion, unique it is—Ryan also approached 18 other artists to provide remixes of GVSUNME's version which, at just under 21 minutes, is most certainly the shortest performance ever recorded. The result is a packed double-disc set with 18 remixes ranging from the relatively reverent to the outrageously reinvented; with the addition of modern technology, it's also a seamless migration of Riley's groundbreaking concept into the vaster sonic potential of music in the new millennium.

Another unique aspect to the recording is that, while it might make logical sense to place the GVSUNME version of "In C" up front, followed by the remixes, Ryan chose to place the remixes first, with the "vanilla" version placed at the very end of the second disc. Instrumental variances aside, the GVSUNME version distinguishes itself by getting the instruments into the pool much more quickly than the leisurely approach taken by most others, lending the piece a certain relentlessness and insistence, while still managing to capture all the beauty of Riley's interlocking fragments, but in a much shorter timeframe. 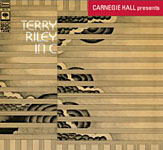 Ryan's choice of remixers includes some familiar faces. Violinist Daniel Bernared Roumain—whose Etudes4violin&electronix (Thirsty Ear, 2007) was one of the year's best—delivers "Zachary's Dream" which, with its programmed beats, dramatic dynamic shifts and soaring violin, is one of the set's most inventive remixes alongside fellow Thirsty Ear label mate DJ Spooky's "In Sea of C," which liberally samples the original performance and, with the addition of a backbeat, chordal movement and no shortage of imagination, turns "In C" into the closest thing it'll ever be to a song. Bang on a Can's David Lang—a composer of no small merit in his own right, including the sublime, minimalism-informed Elevated (Cantaloupe, 2005)—delivers the less-than-appropriately-titled "simple mix," certainly the most unrecognizable rework of Riley's music in the set. Wilco drummer Glenn Kotche begins in equally distant territory on "Smooth," but Riley's relentless pulsating ultimately holds sway, albeit with the addition of Kotche's added percussion and sampled beats.

Lesser-knowns deliver remixes of equal value, ranging from Masonic's techno-driven "Terrycloth Troposphere" to cellist Zoë Keating's stunningly beautiful "Zinc," which interprets Riley through the prism of ambient music forefather Brian Eno, referencing his seminal Music for Airports (Virgin/Astralwerks, 1980). With spare piano loops gradually building towards forward motion, given Riley's unmistakable influence on Eno's work it's only fitting that Keating should draw such a direct link in the reverse direction. Phil Kline's "In Cognito," with its special soundscapes, draws a similar link, while Mikael Karlsson and Rob Stephenson turn Riley's architecture into a mélange of electronic squawks and squibbles, the acoustic instruments processed and rejigged in ways even the intrepid composer couldn't have conceived.

With reworks ranging in length from four to nine minutes, Ryan also gives a couple of his composers/remixers more than one kick at the can. Jack Dangers' (aka Meat Beat Manifesto) "In C - Semi-Detached" opens the set with thundering, heavily reverberated drums adding to the unscored pulse that's also a fundamental part of "In C"—even octave eighth notes drummed steadily throughout the piece on the piano's top two "C" octaves—gradually introducing great washes of sound above his sampling of Riley's 53 fragments. "In C - Extentions" explores similarly spacey territory but, like Ryan's version of the piece with GVSUNME, gets there much more immediately, as it leads to more throbbing electronic beats. Michael Lowenstern's "Bint," like DJ Spooky's remix, adds harmonic changes to turn "In C" into something resembling a song, while his "Foster Grant Mix," with scratching, electronic beats and his own added synth parts, is more like a reverent push of "In C" into the 21st century.

Which is, in the end, what In C Remixed is all about. By giving GVSUNME's version of Riley's classic to a variety of remixers—composers and/or performers themselves—with no instruction other than to use the 21-minute GVSUNME's performance as their foundation, Ryan has essentially done the same thing Riley did back in 1964, only with the added benefit of technological advancements. His careful sequencing of the 18 remixes, before letting his intended audience in on the remixers' source material, is beyond astute, further demonstrating the infinite potential of Terry Riley and his 53 seemingly simple but remarkably conceived interlocking musical fragments. With the one-two punch of Music for 18 Musicians and now In C Remixed, Ryan has positioned himself and Grand Valley State University New Music Ensemble at the forefront of contemporary repertory groups, alongside other established groups including Kronos Quartet, Alarm Will Sound, So Percussion, Bang on a Can and Germany's Ensemble Modern.