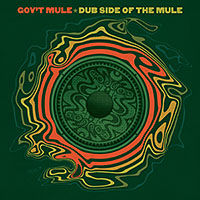 If there are any groups out there who have, for their 20th anniversary, celebrated with a year-long series of as many live releases as Gov't Mule they'd be a challenge to find. As the year-long festivities wind down for the group—beginning as a side project for then- Allman Brothers Band guitarist/vocalist Warren Haynes and (now-sadly deceased) bassist Allen Woody, but which has since taken on a serious life all its own—Mule has released two multi-disc sets, each demonstrating a different side of a group long associated with the Southern roots rock jam band scene but which is clearly far, far broader.

First, in December 2014, there was Stoned Side of the Muke, from a 2009 show paying tribute to the Rolling Stones, followed by December 2014's Dark Side of the Mule—either a single-disc or three-CD/1-DVD Deluxe Edition, with Mule's interpretation of progressive rock's mega-sellers Pink Floyd in addition to plenty of material from Mule's own back catalog of nine studio albums and five live albums. Then, in January 2015, came Sco-Mule—a two-CD set documenting a 1999 two-night first encounter with jazz-cum-jam band-capable guitarist John Scofield that proved how Woody-era Mule was more than ready to meet Sco head-on in a middle ground filled with its own rock-inflected jazz chops.

Now, comes the celebration's finale, Dub Side of the Mule, taken from one of the group's legendary New Year's Eve shows—also available in a single-disc and 3-CD/1-DVD Deluxe Edition—that brings Mule together with Toots Hibbert of Toots and the Maytals fame for a reggae-heavy set that, in the Deluxe Edition also comes with a healthy set of Mule material augmented with music from The Beatles, The Rolling Stones, Procol Harum and others, in addition to a four-song collaboration with Gregg Allman and Friends. All told, the December 31, 2006 show from New York City's Beacon Theater—longtime annual Allman Brothers Band home, with whom Haynes continued to play until the end of 2014 when, after 45 years, the ABB decided to call it quits and go out on a supremely high note—runs nearly four hours, but doesn't lag for a second.

Unlike Dark Side of the Mule, the Deluxe Edition DVD doesn't contain the entire show, but includes the entire set with Toots, mixed for stereo and 5.1 surround. It's a small quibble, but likely a technical one: to fit the entire 227-minute performance, the package would either have had to been expanded to two DVDs or upgraded to Blu Ray technology, either choice bumping the price up. It's a small quibble, though with Blu Ray becoming the standard, it might have been worth the upgrade...also because the sound would be available uncompressed. All that said, with a stage set loaded with palm trees and wooden structures along the back to bring a bit of Jamaica to the Beacon, and a thrilling, exhausting performance with a bounty for the eyes and ears, it's still a relatively small quibble.

For those who only want to hear the Toots set available in the single-disc edition, it's just one more example of Gov't Mule being far more than a Southern blues- based jam band. Still, with only a handful of songs below the five minute mark and nearly a third of the Deluxe Edition's 33 songs going beyond the nine- minute mark, there's plenty of room for soloing from the core group of Haynes, co- founding drummer Matt Abts, bassist Andy Hess and keyboardist Danny Louis. A dark- grooving, evening-opening "Thorazine Shuffle" leaves plenty of space for Haynes' wah- inflected lines, Louis' gritty electric piano and an ostinato-based solo from Abts that builds from a whisper to a roar, while a medley of the Beatles' "She Said, She Said," taken at a slower pace, and an instrumental "Tomorrow Never Knows" that moves into mind-expanding psychedelia, both demonstrate Mule's ability to be reverential while still making any song it chooses to cover its own.

Even when the group plays Procol Harum's "A Whiter Shade of Pale" more faithfully, Haynes' gritty vocal delivery turns it into something that's more than a cover...especially when then guitarist solos with fuzz-rich, blues-drenched phrases of beautiful simplicity that never lose sight of the song's heart. And when the quartet delivers a Sco-less "Sco-Mule," what it lacks in Scofield's signature ability to take the music ever so slightly out, only to reel it back in with perfect timing, it more than makes up for in attitude and grease, with Louis delivering a wah-heavy electric piano solo that's one of his best of the night,

The big question with Sco-Mule was "Who knew?" Dub Side of the Mule might seem to be closer to form than its jazz-informed predecessor, but when Toots Hibbert takes to the stage on the second disc, an expanded 12-piece Mule with horns, background singers and added keys, guitar, bass, drums and percussion turns into a reggae powerhouse. After Mule opens the set with what seems to be a metal-heavy version of the Al Green hit "I'm a Ram," with Haynes sharing vocals with Big Sugar guitarist/vocalist Gordie Johnson, it quickly shifts into a thick reggae groove, the perfect set-opener to change the vibe and prep the audience for Hibberts' arrival with his own "54-46 Was My Number." He may be approaching 70, but Hibberts looks and sounds like a man half his age...except that his voice possesses the experience of a much longer life.

Overall, the Hibbert set consists of shorter songs and tighter arrangements, as the singer and expanded Mule run through a number of his own tunes as well as a soulful version of Otis Redding's "Hard to Handle," sharing the vocals with Haynes, and a surprisingly bright look at Radiohead's "Let Down," which does, indeed, prompt the question "who knew?," except that this time it's: who knew that a tune from Radiohead's seminal OK Computer could morph into an up-tempo reggae tune?

At under three minutes, "Let Down" is the Hibbert set's shortest track (as well as the album's), but Mule takes the opportunity to stretch out on a head-bobbing look at Hibbert's own "Hard Road," which somehow magically ends right on the cusp of the new year. A brief, soulful "Aul Lang Syne" leads into a vivacious version of "Turn On Your Love Light," the Joseph Scott and Don Roney classic that was turned into a lengthy show stopper by jam band forefathers The Grateful Dead and here is the perfect way to see 2007 in and see Hibbert's exhilarating performance out. The set closes with a reggae-i-fied version of Hayne's "Soulshine," a song that's become a signature for both Mule and then Allman Brothers Band but is morphed here into something completely unexpected ... and yet, somehow, inevitable.

As if two-and-a-half hours weren't enough, for those who opt for the Deluxe Edition get another full set, with four songs from Gregg Allman and Friends—his friends turning out to be much of the group that supported Hibbert, along with Allman's guitarist (Val MacCallum), bassist (Jerry Jemmott) and drummer (Steve Potts). Allman's set moves from the rockin' boogie of Clarence Carter's "Sweet Feeling" and a soulful balladic version of Bob Dylan's "Just Like a Woman" to a backbeat-driven look at Chuck Willis' "I Feel So Bad" and, for the mini-set closer, the Allman Brothers' classic "Dreams." Throughout the set, Allman is in terrific voice, all grit and growl...and, despite there being two ABB members onstage with Haynes, "Dreams" manages to sound like something other than the ABB and more like Gregg Allman and Friends—no mean feat, given how Allman's voice and organ work have been such stronger definers in the group that he ultimately led, with the tragic death of brother Duane in 1971 and the subsequent departure of co-founding guitarist Dickey Betts, for a full 45 years.

The rest of the third set (and third CD) is all-Mule, well, with guest harmonicist John Popper on half of the tunes; but the sound is different. With song choices ranging from Haynes and James Brown to Bob Seger, Elmore James and Tom Waits, the soulful vibe of the first half presages Haynes' move towards his 2011 solo album, Man in Motion, while the thundering blues vibe of the set-closing triptych of "Ramblin' Gamblin' Man," "It Hurts Me Too" and "Goin' Out West" returns to pure, unadulterated, hardcore Mule.

With so much diversity in a nearly four-hour evening that had to be both exhilarating and exhausting for band and audience alike, there simply isn't a moment to sit still. It's hard to imagine staying on your feet for that long, and so it's a good thing for aging baby boomers that the Beacon Theater is a seated venue, so you can shake your booty while giving your feet a rest. But more than any of Gov't Mule's 20 anniversary celebration albums yet, Dub Side of the Mule is the one that will, no doubt, encourage a whole pile of private dance parties at home. Who knew, in addition to being a kick-ass jam band as capable of waxing progressive as it can jazz-like, that Gov't Mule could be such a great dance band too?