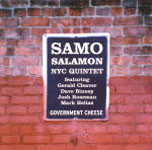 The first, coming from someone who has not heard him before, might center around the angular, distortion tinged guitar, the driving near-rock rhythms and the wide variety of emotions that whiplash the listener.

The second, coming from someone who is familiar with at least his last two releases Two Hours (Fresh Sound New Talent, 2006) and Kei's Secret (Splasc(H) Records, 2006) might be the whiplash from above, but now because this album sounds so different, yet again. After recovering however, the angular, edgy, and at times manic playing, can be recognized as being Salamon.

Bringing together a new set of musicians (save for bassist Mark Helias, who returns from Two Hours), Salamon presents us with another facet of his rapidly developing compositional prowess. Increasing the forces to a quintet with the wildcard choice of trombone, played by Josh Roseman, the music veers between the extremely tough ("Eat The Monster"), the extremely tender ("The Last Goodbye"), those bringing in other culture's rhythms ("It Rains When It Falls" and "How They Washed My Brain") and others that vary widely within themselves, particularly "Her Name."

Salamon goes out of his way in the liner notes to credit saxophonist David Binney's influence. Binney is making waves in increasingly wide circles, as one can hear on Miles Okazaki's Mirror, and Government Cheese bears his mark, if less overtly than in the former record. In fact, Binney's playing on the record has less of the floating ignoring of the bar line that might be called his trademark, and more of the rapid fire sinewy lines.

Drummer Gerald Cleaver takes advantage of the way Salamon writes and becomes another voice in the band rather than an adept pulse keeper. He really listens and reacts to what is happening, adding his own comments to the conversation. Much of the success of the total sound of the record is due to the way Helias and Cleaver push and pull the band.

Most of the tunes have a stretched ABA structure which is only made more noticeable by the quite different "Her Name," which is the outstanding track on the record as it morphs through a few rhythmic feels over its nine minutes.

While Kei's Secret was an extremely hot live album, Government Cheese almost matches it as a studio effort, and this band would burn live. Certainly the trio of recent projects presents varied impressions of Salamon, but through it all, his voice is recognizable. Recommended.