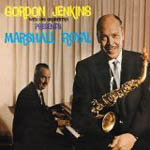 As an integral part of the creative rebirth of the Count Basie band in the 1950s, Marshall Royal has been receiving kudos for decades, and rightly so. As a soloist he never got much exposure, however, and this reissue of a body of music recorded in March of 1960 is the nearest thing he got to a showcase.

It's exposure he deserved, but perhaps Gordon Jenkins wasn't the ideal man to provide the settings. The fact of the matter is they're the kind of thing Royal often has to rise above, and the fact that he does this so successfully is testament to what he could do. The effect overall is of Royal working against the middle-of-the-road nature of Jenkins' arrangements for orchestra, strings and chorus in the interests of creative jazz.

Royal owed a debt to Johnny Hodges in the sense that he never overplayed. This is readily apparent on "Battle Royal," where his grasp of tonal nuance and the shaping of notes are indicative of an individual musical sensibility. "Goodbye," the song for which Jenkins is perhaps best known, is a melancholy miniature in Royal's dextrous hands, and although Jenkins' arrangement verges on the cloying, it takes nothing away from Royal's performance.

The ear might have to make a similar allowance for the unnecessary voices on the intro to "Take The A Train," taken at a much slower tempo than usual and thus ideal for Royal's unhurried ruminations. Happily, the voices are only present on four tracks, though where they occur, they add only further syrup to a musical recipe that could be a threat to dental health without them.

But Royal comes up smelling sweet every time, and of the two elements that are key to this music, it's the soloist who triumphs completely over the setting.