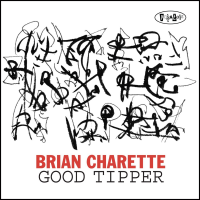 Nine of the eleven tracks on organist Brian Charette's Square One (Posi-Tone, 2014) were originals, but that doesn't mean he's uninterested in tackling the music of others. In fact, judging by this album, it would seem that he really digs digging into covers. Everybody from film score icon John Barry to tunesmith Jimmy Webb to saxophonist Joe Henderson gets a nod during the fun-filled Good Tipper

Charette has built a reputation as one of the most adventuresome yet respectful organists operating today, something that's evident on this album when you hear him cook on a twenty-bar blues ("Good Tipper"), toy with his sound on a grooving original from guitarist Avi Rothbard ("Another Quarter"), recast a Richard Rodgers classic in five ("Spring Is Here") or deliver surprisingly straightforward takes on a James Bond theme ("You Only Live Twice") and a classic from The Zombies ("Time Of The Season"). He's not looking to simply walk in the footsteps of other organists, but he's also not out to alter the organ's position in the jazz firmament. He enjoys pushing, pulling and expanding the instrument's reach a bit while staying true to the music.

In addition to the aforementioned covers, Charette and company deliver an enthusiastic "Cuando Cuando Cuando," an album-ending take on Henderson's "The Kicker," and two different Jimmy Webb classics—"Wichita Lineman," which is covered so often it could almost be considered a standard at this point, and "Up, Up And Away," a number that wreaks of musical kitsch in its decades-old form(s), but sounds just fine when Charette gets done with it. The rest of the program is filled out by pleasing original numbers like "One And Nine," a lively Rothbard tune that brings saxophonist Joe Sucato aboard, and "To Live In Your Life," a relatively mellow Charette number.

Two different trios take flight here, as Charette works with Rothbard and drummer Jordan Young on eight tracks and turns to guitarist Yotam Silberstein and drummer Mark Ferber on the remaining four, but they travel on similar flight paths. The latter rhythm section works its magic on most of the pop-leaning pieces while the former duo helps Charette cover all angles. The music is all solid and appealing, regardless of which trio is at play. Good Tipper=good music.

Good Tipper; Time Of The Season; Spring Is Here; Cuando Cuando Cuando; Another Quarter; Standing Still; You Only Live Twice; Wichita Lineman; Up, Up And Away; One And Nine; To Live Your Life; The Kicker.