Gong at the Assembly Rooms Islington 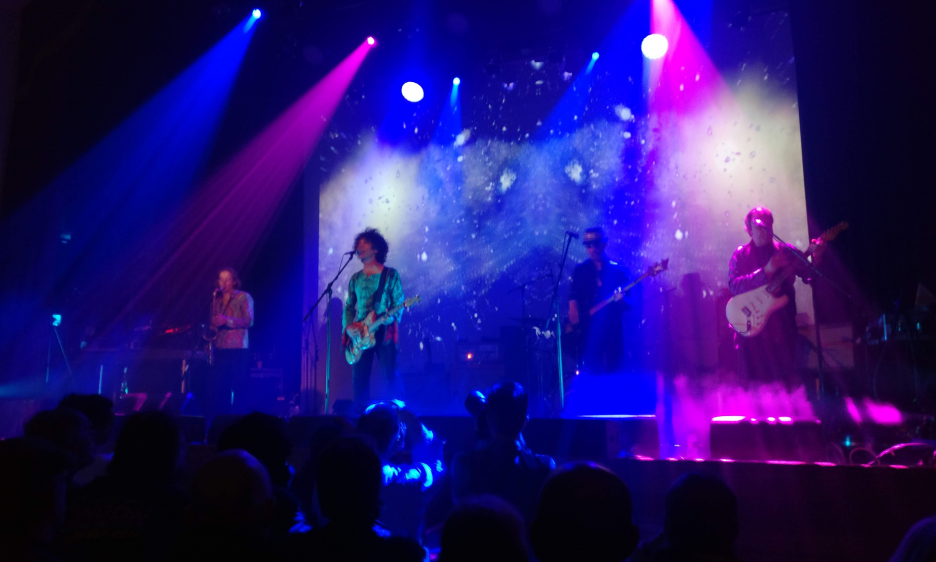 We all know that it's never literally the same river twice, but with a band it's a little more complicated. A name can mean everything when it comes to sales and marketing, so even when the band in question is not heading the concert bill the expectations are complex, reality rather baffling.

The original Australian founder, now four years deceased, Daevid Allen first played "You Can't Kill Me" at the end of the 1960s after exclusion from the UK by the customs authorities when returning with the original Soft Machine left him "stranded" in Paris. Soon he was immersed in the left-bank experimental music scene, and recently published French TV excerpts show just how avant-garde that was! The song emerged as a keystone piece on the band's second official album, introducing the album title as well as the concept of Camembert Electrique in 1971.

Current Gong frontman Kavus Torabi played the track frequently with Allen when he joined the band shortly before Allen's succumbing to cancer in March 2015. But on Saturday at The Assembly Rooms Islington it was the only classic piece that the band offered to their fans, before themselves accompanying former Gong guitarist Steve Hillage at the end of the joint gig to reprise his classic "Glorious Om Riff," that was originally part of the band's "Master Builder."

If a band can be said to have a philosophy, this one is certainly very rooted in the 1970s, when they established themselves with three iconic albums, referred to as The Trilogy. Central to the frivolous storyline, as well as the members' commitment to a collective, experimental lifestyle that was reflected in a brilliant but zany music, was a somewhat "hippy" approach to the world, very close to Buddhist cosmology. The current members have a collective aggregation of nearly 50 years performing as Gong but, while still respectful of spiritual themes, their approach to life and music has changed, thank goodness.

While their current light-show is one element taken from Allen's mystically influenced album covers, and in later years a mandala dominated back-projection, it is an example of how the band have pulled themselves up with their roots and now flood the audience with a cascade of color and flashing light, that is nothing if not relentless. Their music too is not for the faint-hearted. Playing three tracks from their current album (The Universe Also Collapses, Kscope 2019) to an audience largely comprising die-hard fans of older years, the five members recreated something of the original soundscape, with Fabio Golfetti's glissando slide guitar echoing around the hall, just as Allen had pioneered the sound following Syd Barrett's use of a heavily echoed slide. Torabi's style of lyric too is familiar, when "behind the meaning is another meaning, and between the meaning more" (from "Forever Reoccurring" on the last album)—perspicacity for the perplexed.

It is the rhythm section where the modern band differs most from its forebears. Cheb Nettles on drums is a forceful power behind the kit, and along with bassist Dave Sturt carves out a solid rock profile for their music. Maybe playing in a dedicated Gong concert there would be more time and space for Ian East on reeds to recreate the playfulness that original French flautist and sax maestro Didier Malherbe added. But as Allen himself asserted in a final email to the band: "I feel you are all equally on the brink of a whole new era of Gong, musically, lyrically and spiritually and that pretty much all you have each done until now has been a preparation for this time." It is now a band with its roots in the past but the intention of being very much in the present, and with a view to a novel and challenging future. It is well worth testing the new water, maybe even relishing the turbulence.