By BRUCE LINDSAY
September 2, 2018
Sign in to view read count 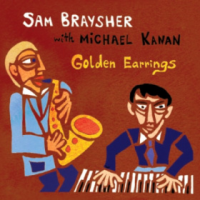 Mostly these days aspiring jazz musicians hear the songs of the American Songbook as "jazz standards," their melodies taken as jumping-off points for improvisational flights of fancy that move the tunes far beyond their earlier incarnations as pop tunes or Broadway showstoppers. It's a distinction that the young English altoist Sam Braysher makes in the liner notes to his debut album Golden Earrings, recorded in collaboration with pianist Michael Kanan. The duo also took note of it when preparing to record this album, going back to the original recordings, learning the original lyrics and consulting the sheet music for the compositions to be found here.

Braysher and Kanan's approach results in a fresh approach to some old favourites and a welcome revisiting of some lesser-known pieces from composers such as Tadd Dameron, Duke Ellington and Jerome Kern. The tunes are stripped back to their essentials, melodies and counter-melodies are played sensitively—swinging, but unshowy.

The best-known tunes are Dietz and Schwartz's "Dancing In The Dark" and the Irving Berlin medley of "What'll I Do," "Always" and "Remember." On the Dietz and Schwartz number Kanan plays the melody while Braysher adds a counter melody based on the orchestral arrangement from the 1953 movie The Band Wagon. Kanan plays "Always" solo—a restrained and affecting performance.

Charlie Parker's "Cardboard" offers another example of the duo's unison playing and lightness of touch. Braysher's "BSP" (a contrafact based on the chords of "Love For Sale") is the album's only original composition, a complex, medium tempo, tune inspired by his interest in Lennie Tristano, Lee Konitz and Warne Marsh. "Way Down Yonder In New Orleans," that staple of trad and Dixieland bands, provides the album with a jaunty closing track: Kanan and Braysher end it with a unison performance of Lester Young's solo from the 1938 Kansas City Six recording. It's a suitable finale to a lovely album.

Dancing In The Dark; Cardboard; Irving Berlin Waltz Medley - What'll I Do, Always, Remember; BSP; All Too Soon; In Love In Vain; The Scene Is Clean; Beautiful Moons Ago; Golden Earrings; Way Down Yonder In New Orleans.