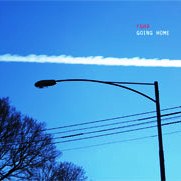 When French philosopher Roland Barthes (1915-1980) wrote about photography in his 1971 essay "The Third Meaning," he conceptualized how an image is perceived not only as something that belongs to a recognizable reality but also as something that carries a meaning that lies beyond what can be put into words; what he called "the third meaning."

Looking at the cover photo by Lana Daubermann, and the many beautiful pictures that grace the booklet of FGHR's Going Home, recalla Barthes' writing. Here is a beauty that is hard to define.

The same goes for the music. While it may be easy to list the elements of FGHR's sound, carried by the combination of acoustic/electric guitar and piano in the forefront, bass and drums in the background, with added layers of percussion and choir, it doesn't really say much about the music.

Neither does it help to place the album within the scope of early ECM records made by Pat Metheny, which may be one of the more likely sources for comparison.

Nominally, Going Home is an album of light fusion with influences that ranges from the mellow samba sounds of "Sevamba" and "St Ali" to the impressionistic beauty of the closing "Affirmation." The tempi and themes are deeply felt and lyrical ballads, but uplifting and singable like pop songs.

It is an album that would be suitable for both background music while eating breakfast, and late night contemplation with headphones. It is a work whose beauty is instantly accessible, without a hint of shallowness or calculated emotional affect. If the exact meaning or reason for the music's beauty can't be pinpointed, suffice it to say Going Home is an album that comes highly recommended.