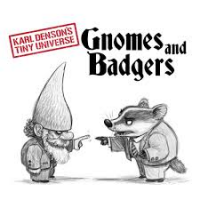 Karl Denson's Tiny Universe swings hard and grooves deeply for the better part of Gnomes and Badgers. In fact, if the tracks with vocals like "What If You Knew" on the first half of the record were sequenced in a different order, those cuts might well be nothing more than mere distraction from the real attraction(s) of the record. Yet even in this order of appearance, these cuts constitute something of an intro to the heart of this group's first record in five years, its cohesive nature, remarkably enough, the final result of two rounds of recording sessions.

Sans singing, the ensemble digs even deeper into a groove during "Can We Trade" than on cuts preceding it. Horns including Chris Littlefield's trumpet bray over a rhythm section (Chris Stillwell on bass and Zak Najor on drums) that pumps furiously. And then to hear the harmonica of Greg Izor howl through "Millvale, PA" in such short order is another revelation altogether: those wailing tones connect Denson and company directly to the blues. Within that process of assimilation, however, the musicians never overstate the obvious references as they mix those musical roots with contemporary styles of funk, r&b and rock.

In keeping with the bandleader's express intent, the latter influences rise to great prominence on Gnomes and Badgers via the dual guitars of D.J. Williams and Seth Freeman. On "Change My Way," to name just one cut, the latter's work on electric and lap steel instruments adds immediately recognizable Southern rock elements. A direct corollary to guesting by The Allman Brothers Band keyboardist Chuck Leavell, such tones are more provocative than the lyrics, especially on the borderline gauche "Something Sweet,"

Understandable as it is Denson feels moved to speak out on the issues of the day, he and his band make more profound statements through tracks on the order of "Gossip." The grinding of wah-wah on both of those numbers deliver the profundity of the elemental power of music, the impact of which on this album might well be heightened considerably if there were more purely instrumental interludes. That said, the vocals more often than not become another sound of the many sonic textures leaping from the mix of Kevin Ratterman.

To that very point, Karl Denson should consider speaking more often through his chosen instruments rather than his voice. Perhaps his work with The Greyboy Allstars and the The Rolling Stones allows him sufficient space to make himself heard on saxophone, thus his lack of instrumental prominence in the arrangements of Gnomes and Badgers, That said, the airy sound of his flute contrasts the rich percussion on "Time to Pray," just a single instance of many on Gnomes and Badgers, in which Denson and Tiny Universe bridge gaps between the multiple genres, thus penetrating the jazz idiom in just the way he seeks to connect with, then help unite, our divided culture.

What If You Knew; Gossip; Change My Way; I’m Your Biggest Fan; Can We Trade; Millvale, PA; Something Sweet; Falling Down; Time To Pray; Smart Boy; Just Remembered.