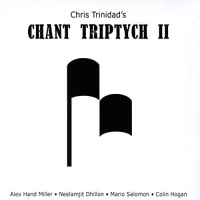 Chris Trinidad seems unique even by musicians' standards: He keeps busy as a multi-instrumentalist, composer, choral conductor, and music educator in and around the San Francisco Bay area, but also has a background in liturgy, liturgical worship and educational leadership.

Chant Triptych II is the second in a series through which he reimagines traditional Gregorian chant melodies in new contexts created by arrangements of instruments from radically different cultures. Trinidad's instrumental palette features his own electric bass guitar; Indian tabla; acoustic and electric guitars; tambura, a stringed lute used in Balkan folk music and as a harmonizing drone in Indian music; bansuri, an Indian flute; and kanjira, a south Indian frame drum. "These melodies were originally used for sung liturgical prayer music, but I wanted to take them elsewhere," Trinidad explains.

Descriptive play-by-play rarely (and barely) does justice to the pure imagination in Trinidad's arrangements, which open up music deeply connected to a specific place (Central and Eastern Europe) and time (ninth and tenth centuries A.D.) for contemporary global jazz audiences. The opening "Sinite Parvulos" sounds more like an Indian raga (from its instrumentation) than a Gregorian chant, but then you can hear its somber original melody quietly assemble and then move forward together, led by tabla (Neelamjit Dhillon) and guitar (Alex Hand Miller) solos expertly played across cultural dividing lines. "I called on them to reach beyond their own borders, find common ground, and apply their 'many voices' in an unfamiliar musical context," suggests Trinidad.

Solo flute sounds the opening call of "Venite Filji," an uncomplicated call to worship; part two assembles the other instruments in a same glorious music posture, which feels quite liturgical and less like jazz even though there are obvious passages of improvisation—a beautiful creation reflected in truly beautiful sound. Arranging its melody onto a lute helps "Qui Timent" sound more Japanese than Gregorian, until Trinidad's electric bass cranks up its walking stride into a trot, and frees the accordion (Colin Hogan) and guitar soloists to color outside traditional lines with their improvisations.

"Nolite Diligere" distills all this technique and spirit in a three-minutes machine gun burst of celebratory and tribal musical joy, illuminated like holiday streetlights by Mario Salomon's bright and bouncy percussion.