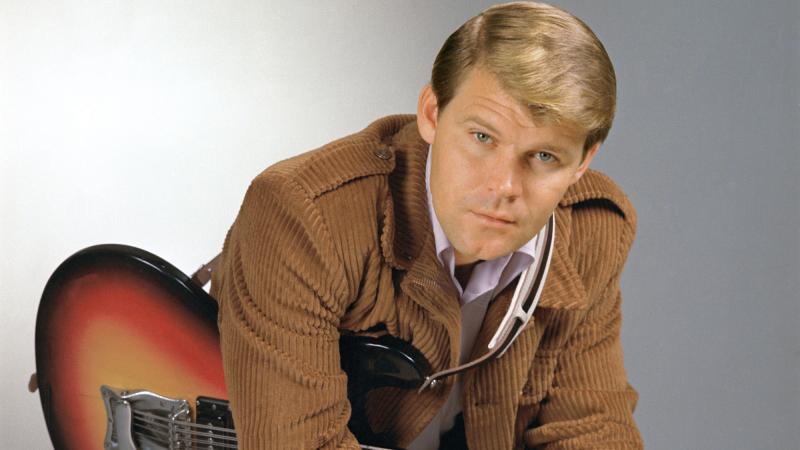 "Well, that moment has come that we have known was an inevitable certainty and yet stings like a sudden catastrophe. Let the world note that a great American influence on pop music, the American Beatle, the secret link between so many artists and records that we can only marvel, has passed and cannot be replaced -my friend and brother in music, Glen Campbell."

Jimmy Webb and Glenn Campbell had a lot in common: "By the Time I Get to Phoenix" (1967); "Wichita Lineman" (1968); "Galveston" (1969); "Where's the Playground Susie" (1969); "The Moon's a Harsh Mistress" (1974). The two men found in one another, each other. Campbell was the best interpreter of Jimmy Webb songs in the same way that Jimi Hendrix was of Bob Dylan's. But this is just one small corner of the terrain that was Glen Campbell.

Glen Travis Campbell, like Johnny Cash, Levon Helm, Lefty Frizzell, Conway Twitty, and Charlie Rich, was an Arkansas product. He born in the minute township of Billstown, located near Delight in southwestern part of the state. Campbell was the seventh son of 12 children in a farming family of modest means. He picked up the guitar at age four and was taught the rudiments by an uncle. Campbell never had any formal guitar lessons, instead teaching himself with constant listening to the radio, developing a good ear, and practice when he wasn't working in the cotton fields.

Campbell was not content picking cotton and turned his attention fully to music, which led to local appearances after is family relocated to Houston, TX. In 1954, he moved to Albuquerque, New Mexico, joining his uncle's band and staying there several years before finally moving to Los Angeles and becoming a session musician and taking a day gig at the American Music Publishing Company, where he began writing songs and recording demos. This brought Campbell to the forefront of LA talent and he joined a group of like-talented musicians that would become the "Wrecking Crew," a group of session musicians that included: bassists Max Bennett and Carol Kaye; drummers Hal Blaine and Jim Gordon; pianists Leon Russell and Dr. John (Mac Rebennack); and guitarists Barney Kessel and Tommy Tedesco, among many others.

The Wrecking Crew was responsible for a large part of all the music coming out of LA in the middle to late 1960s. Campbell contributed to the Beach Boys in the studio on Pet Sounds (Capitol, 29166) and on the road as part of the touring band, filling in for Brian Wilson. He was session guitarist for Rick Nelson, Elvis Presley (Viva Las Vegas), The Everly Brothers, the Monkees, Jan & Dean, Nancy Sinatra, Paul Revere & the Raiders...well, you get the idea. Campbell was ubiquitous to 1960s American popular music. And this was all before his string of personal hits, beginning with "Gentle on my Mind" in 1967 and ending, effectively with "Southern Nights" a decade later.

Like Ray Charles, Campbell made is mark early and definitively. While he remained active musically, it would not be until 2010, when Campbell announced that he had Alzheimer's Disease, that he would begin a farewell tour culminating in his final appearance in Napa, California, November 30, 2012. Following that show, Campbell returned to his Nashville home, where he recorded his final album, Adios (Universal, 2017). Campbell died at home, with his family, August 8, 2017.

I believe that far too many people know Glen Campbell from "Rhinestone Cowboy" (1975), which is, beyond question, great pop music. But Glen Campbell was something else altogether. He was a musician par excellence who seamlessly bridged genres effortlessly. Glen Campbell's death diminishes us in a way that while we will recover, things will never...can never... be the same.

Oh, and if you are looking for a jazz connection, find a performance of "Back Home in Indiana." He smokes it like a Havana Cohiba.