By Duncan Heining
September 2, 2017
Sign in to view read count 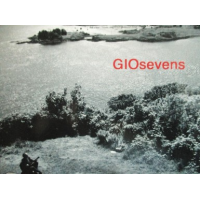 Back in the 60s, there was a pop show on British TV called Thank Your Lucky Stars. It featured a "spin-a-disc" segment, where a DJ and three teenagers scored a clutch of 45s on a scale of one to five. One of these was a girl from the West Midlands called Janice Nicholls, who delighted audiences with her enthusiastic endorsements delivered in a Black Country accent—"Oi'll give it foive!." What the hell has this got to do with GIO Sevens or the price of fish, you may ask? Well, it's funny what comes into your mind when you're listening to free improv and a particularly fine record such as this. What sometimes seems tangential or random, on closer inspection, is anything but.

GIO Sevens was recorded in 2013 at Dunollie Castle, when the mighty Glasgow Improvisers Orchestra was invited to perform in Oban. This small grouping were able to get to Oban early enough to make this record and, for my money, it is as good as anything to come out of the GIO stable.

GIO Sevens reminds me of those qualities that I find irresistible in key improvising ensembles such as the Spontaneous Music Ensemble, the Art Ensemble Of Chicago, the Jimmy Giuffre 3 (with Paul Bley and Steve Swallow), Sun Ra and his Arkestra and the Ganelin Trio. Not that the music here sounds like any of these. Rather it has a similar timeless feel to it that exists on its own terms and in its own space.

Some people may find music made in this way hard to take. Saxophonist-composer Jimmy Giuffre illustrates their dilemma well. How can a musician who recorded "The Train And The River," then make an album like Free Fall? As one unhappy purchaser of the latter noted on Amazon, "It is devoid of recognisable form." But the fact that a listener does not recognise the form does not mean that structure—or melody or harmony or even rhythm—are absent. And GIO Sevens is a consummate exploration of form.

Music is intentionally organised sound, often (or only) acquiring its meaning for the listener within a social and cultural context. To be considered 'music,' it must have form and structure. With free improv, the form is best described as 'contingent form.' That is form that is contingent on the actions of the individuals performing, the abilities and experiences they bring to bear, their interactions, the space in which they perform and the presence of any ambient sounds in the performance space. It arises in the moment, though contingent on the (musical) histories of the performer(s). But it is no more random than my childhood recollections of Ms Nicholls.

The final track, "The Garden" (recorded in the castle garden), illustrates this perfectly. The listener hears birdsong in the background. Bird-song and other non-human sounds of nature are so familiar that we accept such sounds as having a kind of form. With improvised music, the problem for some lies in the fact that the sounds produced cannot be accommodated easily into received notions of melody, harmony, rhythm and structure. Unlike the pop tunes played on Thank Your Lucky Stars.

Yet, the fifteen minutes of "The Garden" contain both a number of different and beautiful melodic episodes. These come mainly Raymond MacDonald's saxophone, Emma Roche's gorgeously birdlike flute, Nicole McNeilly on trombone and the voice of Nicola MacDonald. The improvisation also features a repeating, swirling pulse produced by Stuart Brown's percussion and the percussive effects of George Burt and Neil Davidson on guitars. Nicola MacDonald's melodica also contributes a drone-like counter to the percussion. And there are harmonies too—in the long notes held by brass and woodwinds and from the interweaving melodic lines. This is music that emerges with a naturalness that seems bathed in the warm hues and colours of the environment in which it was recorded.

"Vaults," at eleven minutes, is the other long track on the album. Again, the environment is a crucial element in the recording. There is almost a flatness to the sound, as if each note or phrase is immediately swallowed by the space. The musicians appear to confront this initially with frenetic, feverish activity. In turn, this slows and is replaced by fluttering, skittering flute and guitar, accompanied by Nicola MacDonald's keening voice. The piece closes with flapping percussion over long, sotto voce notes from brass and woodwinds and piping melodica.

With "An Interior," the listener gets another impression entirely. Something about the room lends a clarity and pristine sharpness to the sounds produced primarily by MacDonald, Davidson and Brown. Indeed, the four short tracks contrast very effectively with the two longer pieces, like miniatures as opposed to larger canvases. "Waiting For GIO" ("Let's Go." "We can't." "Why not?" "We're waiting for GIO.") is more like a sea mist with strange eerie sounds penetrating the fog, notably from melodica and flute. "Churn" and "Domestic Space" are, however, quite claustrophobic in feel, perhaps again a reflection of or different exploration of the space of their recording. The latter is particularly noteworthy for George Burt's contribution on acoustic guitar.

Throughout, the sense that the musicians are responding to each other and to their environment is palpable and it is this that makes GIO Sevens so intriguing and so very beautiful. It shows that nothing is random. Oi'll give it foive.