By MARK SULLIVAN
November 30, 2018
Sign in to view read count 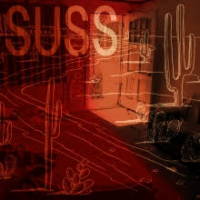 The band SUSS first presented their "psychedelic ambient country instrumentals" on Ghost Box (Self Produced, 2018), a delightful and unexpected window into an eclectic ambient soundscape. That 35-minute session is expanded into nearly an hour here. The first seven tracks reproduce the original album in the original order.

The group is a quintet whose members have worked in various capacities with Lydia Lunch, the B-52s, k.d. Lang, David Bowie, John Cale, Ed Sheeran, Wilco, Norah Jones, The War On Drugs, Burt Bacharach, the Nickelodeon network, The New Yorker, and many others. Cowpunk pioneer mandolinist Bob Holmes is the main catalyst. In their old band Rubber Rodeo he and synthesist Gary Lieb were known for mashing up Country and New Wave rock—but you could see the stitches. This time Holmes says the goal was to "make music where you couldn't see the stitches."

Their success at making "ambient music with traditional instruments" was clear on the original album, a seamless fusion that sounded like ambient pioneer Brian Eno producing the "Spaghetti Western" film scores of Italian composer Ennio Morricone. Mandolin, keening pedal steel guitar and twangy electric guitar (as well as liquid over-driven sounds) are joined at times by whistling, distant voices, Dobro and even harmonica.

The four new tracks expand the playing time without altering the mood. They do tend to be a bit longer than the originals, but the atmosphere is the same. "Steam" comes in with ambient outdoor sounds and dreamy slide guitar glissandi: lots of atmospheric echo and spacey flanging effects. "Salt" pairs the pedal steel with a twangy electric guitar over a throbbing electronic background, while "Laramie" features big chordal swells that break like waves in a storm. "After The Storm" concludes the expanded album with a few minutes of distant soundscapes before launching into beautiful guitar-driven melody (with a drum beat). It all dissolves back into a soundscape, a haunting ending.

The original release of Ghost Box was short, but easily recommended to ambient music fans. This version is even better, a deeper dive into a special—and very American—sound world.