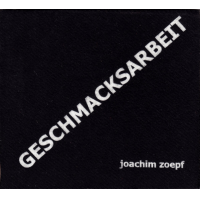 Among other skills, Germany's Joachim Zoepf plays various saxophones as well as bass clarinet and piano. Having recently come across free improv, in 1989 he recorded for the first time, the result being the solo album Solo Reeds -Elements (Musikverlag H. Burger & M. Müller, 1989) on which he played soprano and baritone saxophones plus bass clarinet. In his relatively small discography, it is notable that Geschmacksarbeit ("Taste Work," in English) is Zoepf's sixth solo recording and on it he again plays soprano sax and bass clarinet, a significant development being that Zoepf now also uses the electronics and processing which first appeared on his solo album Production: Berserker (Nur/Nicht/Nur, 2005). The fourteen tracks on Geschmacksarbeit are split equally between soprano sax and bass clarinet, alternately; the seven featuring soprano are titled "Kurzwellen" ("shortwave") while those featuring bass clarinet are "Langwellen" ("longwave"). None of the tracks is overlong, the shortest, "Kurzwellen No.7" lasting two-and-a-quarter minutes, the longest, "Langwellen No. 3," six-and-a-half. Such brevity, allied to the alternation between the two contrasting instrumental sounds, leads to an album that remains varied and fresh throughout. However, the album's greatest variety and interest is provided by Zoepf's improvising. While he started off playing mainstream jazz in the 80's and has demonstrated his virtuosity many times over in other contexts, his solo playing is knowingly exploratory and questioning, a way into sounds and attitudes which can feed into his group playing. In conjunction with his use of computer interfacing, which creates the effect of two (or more) players, this approach to solo playing produces a broad spectrum of sounds. For example, "Langwellen No.7" contains extended passages which could be the work of a reeds quartet with years of experience together, while the next track "Kurzwellen No. 2" features a fascinating forensic exploration of the sound of breath through a saxophone when the reed is just vibrating, the effect being uncannily ghostly at times. The common denominator of the fourteen tracks is that they are never dull and all stand up well to repeated listening. Released in a numbered and signed limited edition, the album comes housed in a distinctively tactile black felt sleeve. Attractive as they are, those features are not necessary to make Geschmacksarbeit appealing; the music alone achieves that.