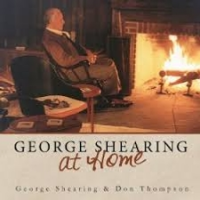 Pianist Sir George Shearing (1919—2011) was himself an integral part of the be bop jazz movement in the late 1940s. His quintet that featured vibraphone and guitar with the standard piano trio was sonically ground breaking. His precise and measured piano style influenced a generation of pianists and several of his compositions ("Lullaby of Birdland" and "Conception") have become jazz standards. He was not flashy, but a solid, well-considered player whose playing could always be counted on to be elegant and durable.

These fourteen tracks were recorded in Shearing's home during a six-week residency at a New York City jazz club in 1983. Bassist Don Thompson, with whom Shearing made these recordings, found them shortly after Shearing's 2011 death at 91. More than aurally acceptable, these recordings reveal a relaxed and swinging Shearing, playing as effortlessly as if it were the easiest thing in the world. Thompson provides expert timekeeping and some piquant soloing of his own on this diverse collection of 20th Century music.

David Raksin's "Laura" shimmers while the Styne/Cahn classic "The Things We Did Last Summer" bounces with a restful and quaint stride. The be bop of Charlie Parker's "Confirmation" is fresh and the abstract and angular "SubconsciousLee" bares all the edges, sharp and smooth. George Shearing at home is a treat in the same way, (Vladimir) Horowitz at Home (Deutsche Grammophon, 1989) was both men were relaxed and at the top of their game.

I Didn't Know What Time It Was; A Time for Love; Ghoti; The Things We Did Last Summer; Laura; The Skye Boat Song; Confirmation; The Girl Next Door; Can't We Be Friends?; I Cover the Waterfront; Out of Nowhere; That Old Devil Called Love; SubconsciousLee; Beautiful Love.