By Donald Elfman
January 18, 2007
Sign in to view read count 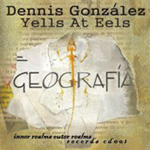 Trumpeter Dennis González's tunes and improvisations are open and free-form, while still retaining a strong rhythmic pulse and forward motion. Evident, too, is a kind of Southwestern color that looks towards Mexico and Latin America. Yells at Eels is the name of a group he started with his sons, bassist Aaron and drummer Stefan.

Geographia has the vibe of a party of like-minded players, and the whole thing feels live—with Stefan bashing away but continuing to hold that pulse, and Aaron thumping acoustically and electrically to further the far-out jam band groove. The guests are friends and compatriots from the local scene—tenor saxophonist Carl Smith, flutist Devon Wells, trombonist Kim Corbet and electric guitarist Bill Pohl—who float in and out of the tunes with complementary colors. The appropriately named opener, "Ethereal Carpet Ride, finds Stefan on vibes, Dennis on drums and flute, Aaron on acoustic bass, and guest Wells also on flute, inviting us aboard their moving aerial transport. There's a solid groove, even as all the players wail.

The title tune also seems to be about exploring places as Dennis (Bb trumpet), Smith (tenor), Aaron (bass) and Stefan (drums) express their open and loose approach to movement in a group composition/improvisation. This is not about pyrotechnics or about aggressive soloing, but rather communication among eloquent players.

The family González wrote the expressive "Elegy for a Slaughtered Democracy, whose poignancy and power suggest that it may even be America. Though all the tunes are somewhat extended improvisations, the album closes with an impassioned document for another major force in new music, bassist William Parker. The piece and the album as a whole celebrate the continued vitality of freedom and passion of improvisation and group communication.