By Frederick Bernas
August 27, 2008
Sign in to view read count 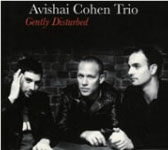 With this release on his own Razdaz Recordz, Avishai Cohen firmly entrenches himself as a frontrunning innovator in the piano trio medium. The Israeli bassist is joined by Mark Guiliana on drums and countryman Shai Maestro on piano—the latter a change in personnel from Continuo (Razdaz, 2006) and Live At The Blue Note (Razdaz, 2007).

"Seattle" represents a slightly ponderous start, with a lyrical bass solo from Cohen over meandering chordal piano vamps, but it is not more than a gentle prelude to what is coming up. The next track, "Chutzpan," gives a fuller insight into the incredible locked synchronisation that exists between these three musicians. Shifting between angular, cascading motifs and jumping, jittery movements with consummate ease, the trio is well-drilled yet instinctive in its manner of interaction.

"The Ever Evolving Etude" is an outstanding track, a perfect example of Cohen's minutely accurate compositional style. Based around a couple of piano riffs and building in degrees, it works up to a frenzy of intricately subdivided phrasing with manically precise off-pulse syncopations. It's a wall of sound that doesn't stand still. Similar traits are present on tunes such as "Pinzin Kinzin," "Eleven Wives," and the dense album closer "Structure in Emotion," but they are all different enough to make the CD unpredictable.

A few slower items add further spice to the mix: "Variations in G Minor," "Puncha Puncha," and the title track, "Gently Disturbed," are more relaxed but no less crafty. It's all perfectly executed and Cohen's compositional identity has become distinctively recognisable—particularly in piano voicing and the rhythmic intensity he draws from his group. In Maestro and Guiliana he has found ideal poetic partners.

The disc's title is reflective of the music—many of Cohen's ideas are challenging, but not inaccessible. Listeners can almost obliviously float through the advanced concepts without getting hung up, in the same way the musicians do. So, while it can take several listenings to fully understand what's going on, that effort should not be a deterrent to enjoying this release.