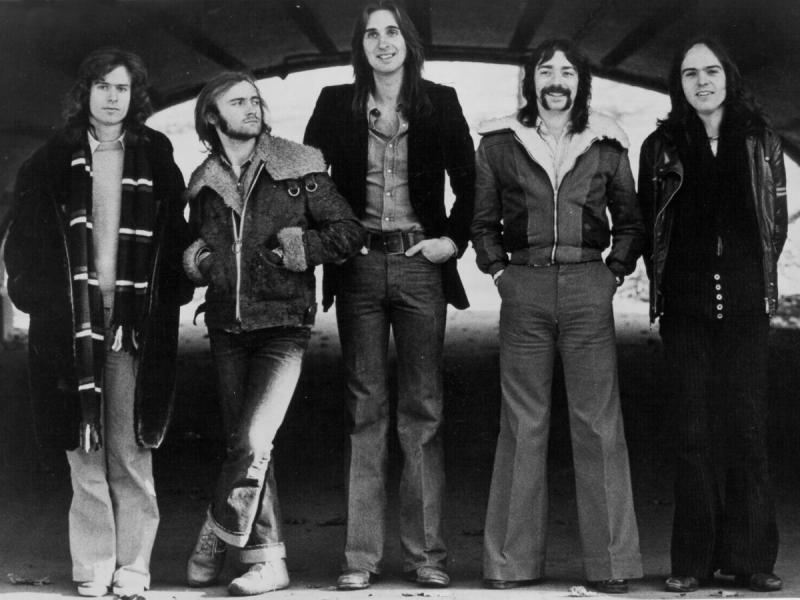 By Trevor MacLaren
January 14, 2007
Sign in to view read count
During the last thirty years the world has been stuck in the syrupy sludge of the Phil Collins era of Genesis, when it was impossible to distinguish a solo Collins record from a Genesis one. Fans of the original group have long been dismayed by the acquired, gargantuan pop overtones of a band which was one of the most intriguing prog-rock groups of the early 1970s. Unless you've heard those early records forget all that has happened from the 1978 release of ...and then there were three... on.

Formed in 1965 by schoolmates Peter Gabriel and Tony Banks, Genesis was originally rounded out with Anthony Phillips (guitar), Mike Rutherford (bass and guitar) and Chris Stewart (drums). After a couple of singles the band entered the studio for their debut. From Genesis To Revelations was marred by producer Jonathan King's lush string arrangements, which set out to copy the road-tested magic of the early Bee Gees records.

Though the brothers Gibb discs were genius slices of chamber pop, the sound really didn't fit the material Genesis was writing. The record has been released in many incarnations but Genesis fans avoid it. With some personnel changes the band entered the studio again, and the sound that would define early 1970s Genesis began to gel on 1970's

Trespass, though it includes the fan favorite "The Knife" is an often-boring recording. It's apparent that the band is in transition and lacks the energy that would be a later trademark. They do manage to lay down the schematic from which they will work for the next six years. Trespass has a pseudo-folk prog feel, restricting the appeal of the complex arrangements contained within. This record unlike the debut album is an important piece since it contains the seeds of the ideas that would come to fruition on the next two records.

With the addition of the newly acquired Phil Collins on percussion and Steve Hackett on lead guitar, Nursery Cryme was the breakthrough in sound that Genesis needed. Though the next three studio albums are all superior, the best work on this record makes up for the weaknesses. Nowhere is this better exemplified than on "The Return Of The Giant Hogweed." Here the band stretch out and jam, showing their skills. Collins may have destroyed many prog elements, yet his percussion skills have always been brilliant. Hackett is another virtuoso player, who first used the tapping and cross sweeping that many guitarists of the 1980s would rip off (and heard here on Nursery Cryme for the first time). At the same time, Gabriel began to show his skills as an articulate lyricist, while creating a genius theatrical presence on stage.

In 1972, Foxtrot became the technical and musical breakthrough that the band had been building to. Beginning with the favorite "Watcher Of The Skies"—inspired by Arthur C. Clarke—and ending with the 23 minute "Supper's Ready," which is considered by many fans to be their masterpiece.

Though every track here is strong, "Supper's Ready" stands out since it is one of the finest examples of extended length prog-rock jams. It is comprised of seven parts: "Lover's Leap," "The Guaranteed Eternal Sanctuary Man," "Ikhnaton And Itsacon And Their Band Of Merry Men," "How Dare I Be So Beautiful?," "Willow Farm," "Apocalypse In 9/8 (Co-Starring The Delicious Talents Of Gabble Ratchet)," and "As Sure As Eggs Is Eggs (Aching Men's Feet)." The track uses a variety of structures and many of the songs included costume changes for Gabriel when performed live.

1973 brought this exquisite live release. Though people would not get to see the crazy live show they would get to hear some of the stories that Gabriel would use when introducing songs. The disc shows that some Genesis tunes, such as "The Knife" were better live. Though a full live version of "Supper's Ready" was originally scheduled and put on the test pressings, it was dropped to make the album a single disc affair. But later in the year came Genesis' finest release yet, Selling England By The Pound.

Selling England By The Pound
Atco/Atlantic
1973

Considered by many to be the crown jewel of the Genesis catalogue, Selling England By The Pound featured all around genius musicianship and a concept of medieval England. Hackett's work on "Firth Of Fifth" is some of the finest he has ever done, with beautifully executed solos that stand up to the amazing opening by Banks. "The Cinema Show," which features two lovers who are reincarnations of ancient Greeks, is heavily indebted to the "Fire Sermon" from T.S. Eliot's The Waste Land. The track is another shining example of intelligently realized structures used as a base for improvised soloing. Last but certainly not least is the double album that would be Peter Gabriel's swan song from the group...

The Lamb Lies Down On Broadway
Atco/Atlantic
1974

The Lamb Lies Down On Broadway is a two record concept album built around short pieces that interconnect to tell the story of Rael. Rael is a New York hustler searching for his brother John in an underground that is filled with monsters and nightmarish events. The story is loose and the music jumps through a variety of genres. Ignoring the folk basis of Selling England By The Pound, The Lamb Lies Down On Broadway focuses more on Tony Banks' synth work, as well as having a harder edge (that at times comes off as proto-punk). This could be the work of producer and keyboard visionary Brian Eno. The synths began to take over. Gabriel lacked musical input, dealing instead with the lyrics and story. Though the album is flawed the music is extraordinary, but lacks the great soloing of the records that preceded it. This would become a point of contention for Hackett after Gabriel's departure.

Though the next two releases with Phil Collins on vocals would follow in a similar fashion with good results, the departure of Gabriel left a hollow feeling to Genesis' overall sound. Banks wrote many of the compositions, and pushed the synth to the forefront. The music became more about texture and less about the amazing soloing that slid through the early records. When it comes down to jazz vibe, Selling England By The Pound is where the listener is recommended to end the journey. But prog fans will want to keep going until ...and then there were three....

Tracks: Looking for Someone; White Mountain; Visions of Angels; Stagnation; Dusk, The Knife.

Tracks: The Musical Box; For Absent Friends; The Return of the Giant Hogweed; Seven Stones; Harold the Barrel; Harlequin; The Fountain of Salmacis.

Tracks: Watcher of the Skies; Time Table; Get 'Em Out By Friday; Can-Utility and the Coastliners; Horizons; Supper's Ready.

Selling England By the Pound

Tracks: Dancing With the Moonlit Knight; I Know What I Like (In Your Wardrobe); Firth of Fifth; More Fool Me; The Battle of Epping Forest; After the Ordeal; The Cinema Show; Aisle of Plenty.

The Lamb Lies Down on Broadway

Tracks: CD1: The Lamb Lies Down on Broadway; Fly on a Windshield; Broadway Melody of 1974; Cuckoo Cocoon; In the Cage; The Grand Parade of Lifeless Packaging; Back in N.Y.C.; Hairless Heart; Counting Out Time; The Carpet Crawlers; The Chamber of 32 Doors. CD2: Lilywhite Lilith; The Waiting Room; The Supernatural Anaesthetist; The Lamia; Silent Sorrow in Empty Boats; The Colony of Slippermen: The Arrival/Visit to the Doktor/Raven; Ravine; The Light Dies Down on Broadway; Riding the Scree; In the Rapids; It.